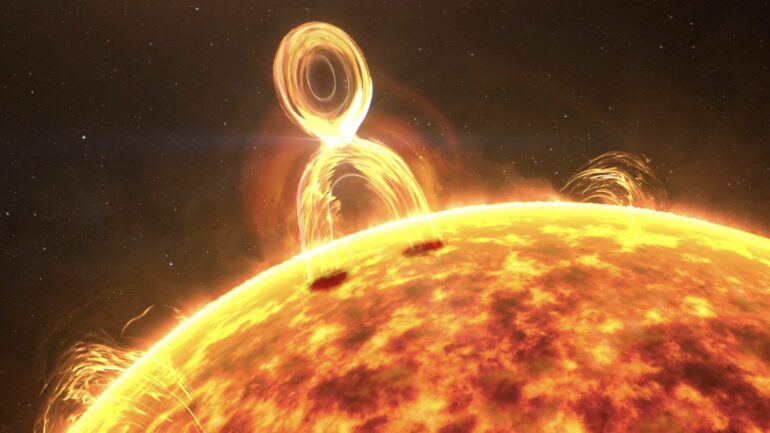 As recognizable as the phrase “the vast emptiness of space” is, the universe is anything but. At first glance, celestial objects are few and far between, but in reality, the universe is teeming with all sorts of substances like charged particles, gases, and cosmic rays.

“This phenomenon is seen everywhere in the universe. At home you can see them in solar flares or in Earth’s magnetosphere. When a solar flare builds up and appears to ‘pinch’ out a flare, that is a magnetic reconnection,” explains Taichi Morita, assistant professor at Kyushu University’s Faculty of Engineering Sciences and first author of the study. “In fact, auroras are formed as result of charged particles expelled from the magnetic reconnection in Earth’s magnetic field.”

Nonetheless, despite its common occurrence, many of the mechanisms behind the phenomena are a mystery. Studies are being conducted, such as in NASA’s Magnetospheric Multiscale Mission, where magnetic reconnections are studied in real time by satellites sent into Earth’s magnetosphere. However, things such as the speed of reconnection or how energy from the magnetic field is converted and distributed to the particles in the plasma remain unexplained.

An alternative to sending satellites into space is to use lasers and artificially generate plasma arcs that produce magnetic reconnections. However, without suitable laser strength, the generated plasma is too small and unstable to study the phenomena accurately.

“One facility that has the required power is Osaka University’s Institute for Laser Engineering and their Gekko XII laser. It’s a massive 12-beam, high-powered laser that can generate plasma stable enough for us to study,” explains Morita. “Studying astrophysical phenomena using high-energy lasers is called ‘laser astrophysics experiments,’ and it has been a developing methodology in recent years.”

In their experiments, reported in Physical Review E, the high-power lasers were used to generate two plasma fields with anti-parallel magnetic fields. The team then focused a low-energy laser into the center of the plasma where the magnetic fields would meet and where magnetic reconnection would theoretically occur.

“We are essentially recreating the dynamics and conditions of a solar flare. Nonetheless, by analyzing how the light from that low-energy laser scatters, we can measure all sorts of parameters from plasma temperature, velocity, ion valence, current, and plasma flow velocity,” continues Morita.

One of their key findings was recording the appearance and disappearance of electrical currents where the magnetic fields met, indicating magnetic reconnection. Additionally, they were able to collect data on the acceleration and heating of the plasma.

The team plans on continuing their analysis and hopes that these types of “laser astrophysics experiments” will be more readily used as an alternative or complementary way to investigate astrophysical phenomena.

“This method can be used to study all sorts of things like astrophysical shockwaves, cosmic-ray acceleration, and magnetic turbulence. Many of these phenomena can damage and disrupt electrical devices and the human body,” concludes Morita. “So, if we ever want to be a spacefaring race, we must work to understand these common cosmic events.”