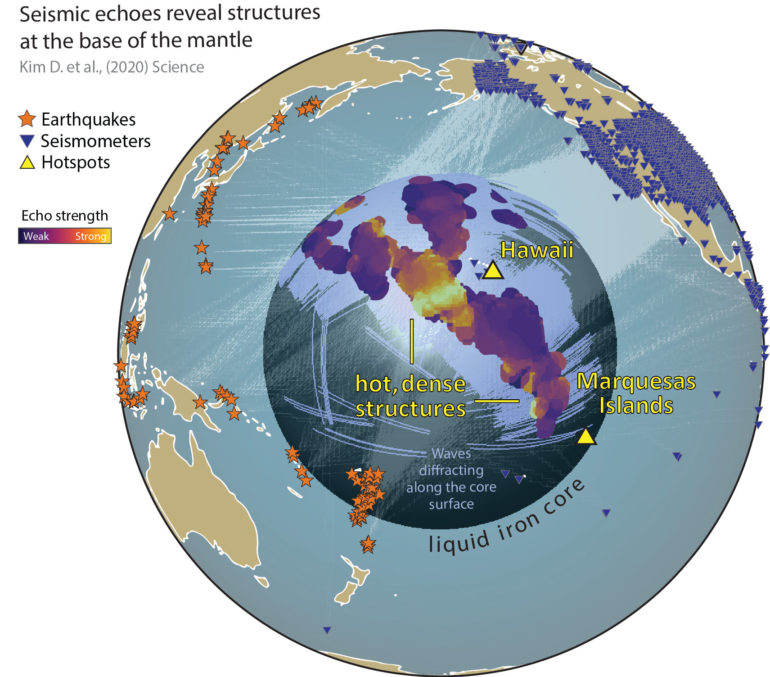 University of Maryland geophysicists analyzed thousands of recordings of seismic waves, sound waves traveling through the Earth, to identify echoes from the boundary between Earth’s molten core and the solid mantle layer above it. The echoes revealed more widespread, heterogenous structures—areas of unusually dense, hot rock—at the core-mantle boundary than previously known.

Scientists are unsure of the composition of these structures, and previous studies have provided only a limited view of them. Better understanding their shape and extent can help reveal the geologic processes happening deep inside Earth. This knowledge may provide clues to the workings of plate tectonics and the evolution of our planet.

The new research provides the first comprehensive view of the core-mantle boundary over a wide area with such detailed resolution. The study was published in the June 12, 2020, issue of the journal Science.

“By looking at thousands of core-mantle boundary echoes at once, instead of focusing on a few at a time, as is usually done, we have gotten a totally new perspective,” said Doyeon Kim, a postdoctoral fellow in the UMD Department of Geology and the lead author of the paper. “This is showing us that the core-mantle boundary region…