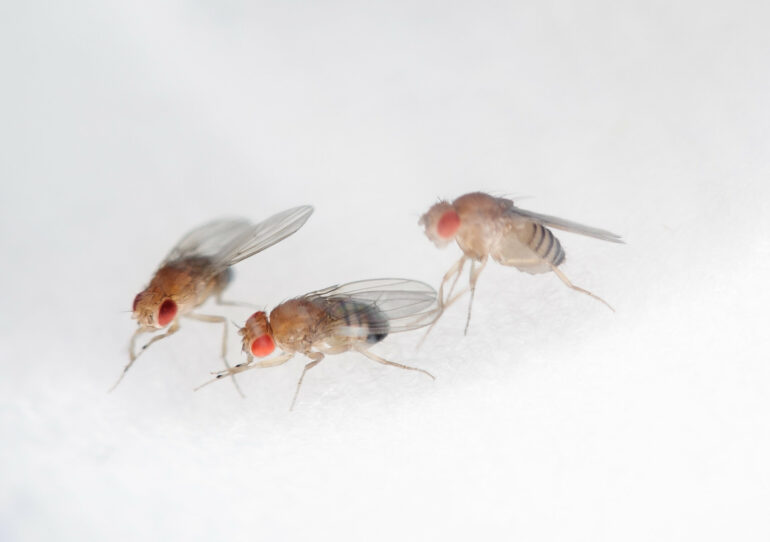 Space travel to the moon, Mars, and beyond can expose astronauts to extreme conditions, causing potential health issues. To prepare for future long-duration missions, NASA studies how the effects of space—changes in gravity, radiation, and more—impact “model organisms,” or other kinds of life that are biologically similar to humans. New findings from a study using fruit flies on the International Space Station suggest that space travel has an impact on the central nervous system, but that artificial gravity provides partial protection against those changes.

“Microgravity poses risks to the central nervous system, suggesting that countermeasures may be needed for long-duration space travel,” said Dr. Janani Iyer, a Universities Space Research Association (USRA) project scientist at NASA’s Ames Research Center in California’s Silicon Valley and an author on the paper published today in Cell Reports. “As we venture back to the moon and on to Mars, reducing the harmful effects of microgravity will be key to keeping future explorers safe. This study is a step in the right direction to explore the protective effects of artificial gravity in space and to understand the adaptation to Earth conditions after returning from space.”

Fruit flies are the ideal organism for this kind of research due to their similarities to humans. There’s a significant amount of overlap between the cellular and molecular processes of flies and humans. Almost 75% of the genes that cause disease in humans are shared by fruit flies, meaning the more we learn about fruit flies, the more information scientists have to investigate how the space environment may impact human health. Flies also have much shorter lifespans—about two months and reproduce in two weeks. The three weeks the flies spend in space is equivalent to about three decades of a human’s life, giving scientists more biological information in a shorter time span.

Understanding the gravity of the situation

In this study, scientists sent flies to the space station on a month-long mission in a newly developed piece of hardware called the Multi-use Variable-gravity Platform (MVP), capable of housing flies at different gravity levels. The flies in this hardware had access to fresh food as they lived and reproduced. By using distinct compartments, the MVP allowed for different generations of flies to be separated. On the space station, one group of fruit flies experienced microgravity similar to their human counterparts. Another group was exposed to artificial gravity by simulating Earth’s gravity on the space station using a centrifuge—an instrument that spins to simulate gravity. While on the space station, cameras in the hardware recorded behavior of these “flyonauts.'” At different points in time, some of the flies were frozen and returned to Earth to study their gene expression.

After the flies returned to Earth, onboard a SpaceX Dragon capsule that splashed down in the Pacific Ocean, the flies were brought back to Ames for further analysis. Upon arrival, scientists at Ames worked around the clock for two days to sort the flies and perform behavioral and biochemical tests. The same analyses were run on a set of flies kept on Earth as a control experiment, to provide a baseline to compare the data from the “flyonauts.”

This study was one of the first of its kind to take an integrated approach to how the space environment impacts the nervous system. Scientists looked at the fly behavior by observing movement of flies as they moved about in their habitat, changes at the cellular level in the fly brain, how gene expression modifications impact the nervous system, and more. Observed changes came in many forms, some easy to see simply by looking at the cameras included in the MVP’s compartments, others that required further study on the return to Earth. The behaviors studied included inflight fly activity and climbing ability upon return to Earth. Flies have a natural response to climb up their container when tapped down, and this was used as a test of their abilities post-flight. Flies in microgravity were more active than those in the artificial Earth gravity, but also showed difficulty during this climbing test after returning to Earth.

More in-depth analysis on the ground immediately post-flight revealed neurological changes in flies exposed to microgravity. As the flies acclimated to being back on Earth after their journey, the flies that experienced artificial gravity in space aged differently. They faced similar but less severe challenges to the flies that were in microgravity.

Paving the way for future studies

The results from this study suggest that spaceflight causes stress in the fly’s cells that lead to negative behavioral and neurological impacts, as well as changes in gene expression in the fly brain. However, using artificial gravity can provide temporary relief to the difficulties microgravity in space causes on the nervous system of a fruit fly, even if there are still long-term health complications.

Because fruit flies and humans are very different organisms, despite their genetic overlaps, these results can’t speak directly to what humans will experience over a lifetime in space—but it paves the way for scientists to follow up when designing ways to protect astronauts as they travel to destinations with a variety of gravity levels in the future.

Human and machine intelligence work together to find 40,000 ring galaxies

“With the upcoming long-duration deep space missions, where astronauts will be exposed to varying levels of gravity, it is imperative that we understand the impacts of altered gravity on the neurological function,” said Dr. Siddhita Mhatre, a KBR Wyle senior scientist at Ames and an author of the published paper. “If we can use artificial gravity to delay space-related deficits, maybe we can extend the future mission timelines. And flies in space, alongside the astronauts, will help to further our efforts in keeping astronauts healthy.”