Long-lived lakes reveal a history of water on Mars 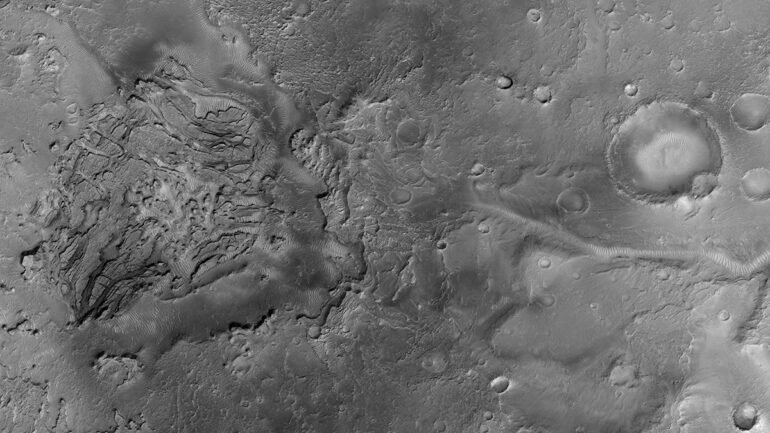 The northern hemisphere of Mars is divided into two broadly distinctive areas: the smooth northern lowlands and the pockmarked southern highlands. The region of Arabia Terra sits along the transition between these two regions and is thought to contain some of the planet’s oldest rocks, at more than 3.7 billion years old.

Among the craters in the southern highlands, valleys and paleolakes abound, exposing sedimentary and geomorphologic evidence of liquid water. However, relatively few paleolakes have been identified in Arabia Terra.

From this imagery, the team created high-resolution maps and digital elevation models to study the area’s geomorphology, which allowed them to identify and describe seven new paleolakes in the region. The work is published in the Journal of Geophysical Research: Planets.

The researchers focused on paleolake features including lake levels, drainage catchments, fans, and lake outlets. They found that the shapes of the lakes were irregular in comparison with the circular-shaped lakes found in craters in the southern highlands. There was evidence of surface water inflows that filled the lakes as well as outlet streams that drained them, forming a cascading chain of lakes.

The team also observed multiple past water levels within each of the paleolakes, indicating that the lakes persisted over long periods of time during the Noachian, rather than forming and disappearing quickly.

To maintain the filling and drainage of the lakes, liquid water must have been common, with steady inputs into the lake system from precipitation and groundwater, the researchers concluded. The potentially habitable environment in Mars’s distant past indicated by these paleolakes offers an ideal location for future astrobiology and paleoclimate studies, they suggest.