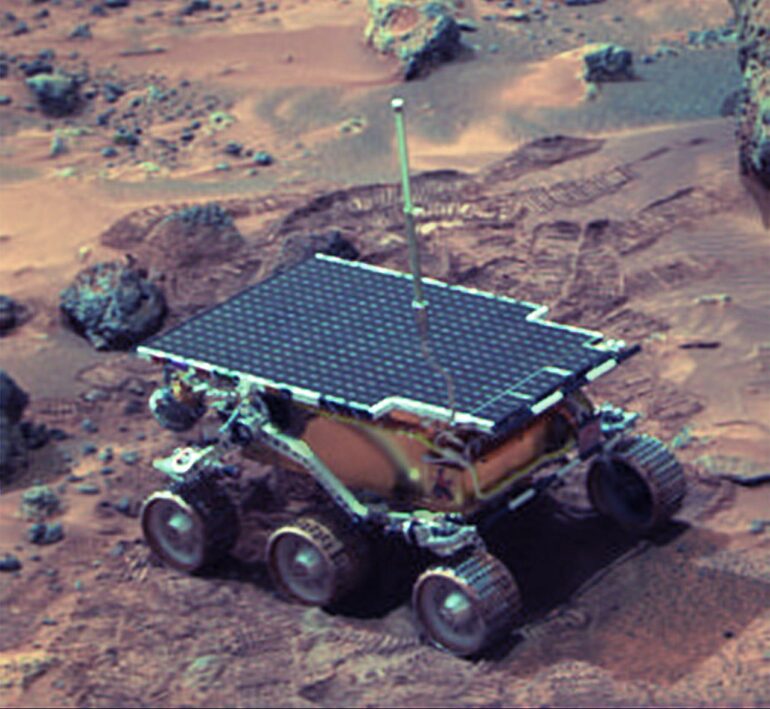 When a daring team of engineers put a lander and the first rover on the Red Planet a quarter century ago, they changed how the world explores.

On a July evening in 1997, Jennifer Trosper drove home from work at NASA’s Jet Propulsion Laboratory holding a picture of the Martian surface to her steering wheel. Earlier that day, the agency’s Pathfinder mission had landed on Mars encased in protective air bags and taken the image of the red, rubbly landscape that transfixed her.

“As I was on the freeway, I had that image on my steering wheel and kept looking at it,” Trosper said, reminiscing. “I probably should have been looking more closely at the road.”

Given that Trosper was the mission’s flight director, her excitement was understandable. Not only had Pathfinder landed on Mars, a feat all its own, but it had done so at a fraction of the cost and time required of previous Mars missions. And, the next day, the team was set to change the course of Mars exploration forever: They had sent instructions to Pathfinder to extend a ramp so that history’s first Mars rover, Sojourner, could roll down onto the planet’s surface.

Named after the fiery American abolitionist and women’s rights activist Sojourner Truth, the rover weighed just 25 pounds (11 kilograms) and was no larger than a microwave oven. But after touching down and spending 83 days traveling the surface, the tiny spacecraft proved that exploring Mars with a rover was possible. It also led Trosper to work on a series of ever-larger, more complex rovers: Spirit and Opportunity, Curiosity, and NASA’s most advanced Mars rover to date, Perseverance, on which she served as project manager until recently.

In fact, just as Pathfinder took Sojourner along for the ride, Perseverance brought Ingenuity, the plucky little helicopter that proved powered, controlled flight in Mars’ thin atmosphere is possible. Slated for just five flights, Ingenuity has flown 29 times so far, and it has the potential to reshape Mars exploration every bit as much as Sojourner did a quarter century ago.

With every new mission and every new way of exploring Mars, humanity gains a better understanding of how the Red Planet once resembled Earth, covered by rivers and lakes and featuring the chemistry needed to support life.

NASA’s search for life on the Martian surface started in earnest in 1976, when the twin Viking landers arrived. The agency wouldn’t land another spacecraft on Mars until Pathfinder, which arose in an era when NASA had been directed to build its missions “faster, better, cheaper.” Pathfinder’s team harnessed new approaches and technologies to deliver the mission ahead of schedule and at a lower cost than the Viking landers.

Jessica Samuels, an engineering intern in Arizona at the time of Pathfinder’s landing, remembers watching news coverage of the event with her roommate. The excitement helped lead her to pursue aerospace engineering.

“That moment—seeing this little mechanical rover exploring the surface of another planet—made me realize that’s something I would love to do,” said Samuels, now Perseverance’s mission manager. “I had always been interested in space, but that was the spark where I thought this could actually be my profession.”

To take the public along for the journey, the agency harnessed the power of another kind of relatively new technology: the Internet. A website devoted to the mission featured the latest images from Mars, and it became a sensation.

Doug Ellison, who today uploads commands to Curiosity from JPL, was about to enter college in rural England when Pathfinder touched down. After hearing about Pathfinder’s website, he bicycled into town to an IT business that let people pay by the hour for Internet access.

With the business’ employees huddled behind him, Ellison saved Pathfinder’s Martian landscapes onto a 3 1/2-inch floppy disk (this was an era long before cloud computing) and printed them out on a black-and-white dot matrix printer to create a vista of the Red Planet he could look at from home.

He taped the print-outs up to form a circle. Then, he stuck his head in it.

“It was pretty much the worst VR experience ever,” Ellison said.

Even so, the Internet provided an inspiring new way to experience space exploration.

NASA opens sample taken from the Moon 50 years on

“Putting so much online so quickly was a paradigm shift. That’s the motivation today to share as much as we can as quickly as we can from our rover missions,” said Ellison. “I think the Mars program owes Pathfinder a debt of gratitude for being the entire stepping stone for everything since.”

Sojourner began as a technology demonstration, NASA’s way of testing and proving what is possible. Ingenuity began the same way—though now it’s an operations demonstration scouting locations on Mars not just for Perseverance, but for a possible landing spot for a future Mars Sample Return campaign.

The campaign would bring samples collected by Perseverance to Earth to be studied by powerful lab equipment searching for signs of ancient microscopic life. But the campaign would include other milestones, like the first instance of a rocket launching off the surface of another planet (a crucial part of getting samples from Mars to Earth). That feat would also support future efforts to land humans on Mars and bring them back home.

Back in 1997, Trosper and team had their hands full just learning to drive a rover on Mars for the first time. “We were a little bit cowboyish. We just didn’t know what we didn’t know,” she said.

What they did know was this: Their mission has lived up to its name, finding a path forward to what had seemed almost impossible before.