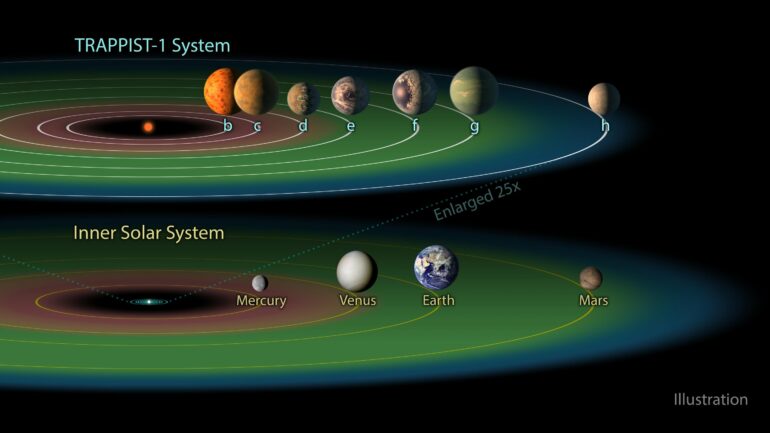 In the past, scientists have focused on planets situated within a star’s habitable zone, where it is neither too hot nor too cold for liquid surface water to exist. However, even within this so-called “Goldilocks zone,” planets can still develop climates inhospitable to life. Sustaining temperate climates also requires a planet have sufficient heat to power a planetary-scale carbon cycle. A key source of this energy is the decay of the radioactive isotopes of uranium, thorium and potassium. This critical heat source can power a rocky exoplanet’s mantle convection, a slow creeping motion of the region between a planet’s core and crust that eventually melts at the surface. Surface volcanic degassing is a primary source of CO2 to the atmosphere, which helps keep a planet warm. Without mantle degassing, planets are unlikely to support temperate, habitable climates like the Earth’s.

“We know these radioactive elements are necessary to regulate climate, but we don’t know how long these elements can do this, because they decay over time,” said Dr. Cayman Unterborn, lead author of an Astrophysical Journal Letters paper about the research. “Also, radioactive elements aren’t distributed evenly throughout the Galaxy, and as planets age, they can run out of heat and degassing will cease. Because planets can have more or less of these elements than the Earth, we wanted to understand how this variation might affect just how long rocky exoplanets can support temperate, Earth-like climates.”

Studying exoplanets is challenging. Today’s technology cannot measure the composition of an exoplanet’s surface, much less that of its interior. Scientists can, however, measure the abundance of elements in a star spectroscopically by studying how light interacts with the elements in a star’s upper layers. Using these data, scientists can infer what a star’s orbiting planets are made of using stellar composition as a rough proxy for its planets.

“Using host stars to estimate the amount of these elements that would go into planets throughout the history of the Milky Way, we calculated how long we can expect planets to have enough volcanism to support a temperate climate before running out of power,” Unterborn said. “Under the most pessimistic conditions we estimate that this critical age is only around 2 billion years old for an Earth-mass planet and reaching 5–6 billion years for higher-mass planets under more optimistic conditions. For the few planets we do have ages for, we found only a few were young enough for us to confidently say they can have surface degassing of carbon today, when we’d observe it with, say, the James Webb Space Telescope.”

This research combined direct and indirect observational data with dynamical models to understand which parameters most affect an exoplanet’s ability to support a temperate climate. More laboratory experiments and computational modeling will quantify the reasonable range of these parameters, particularly in the era of the James Webb Space Telescope, which will provide more in-depth characterization of individual targets. With the Webb telescope, it will be possible to measure the three-dimensional variation of exoplanet atmospheres. These measurements will deepen the knowledge of atmospheric processes and their interactions with the planet’s surface and interior, which will allow scientists to better estimate whether a rocky exoplanet in habitable zones is too old to be Earth-like.

“Exoplanets without active degassing are more likely to be cold, snowball planets,” Unterborn said. “While we can’t say the other planets aren’t degassing today, we can say that they would require special conditions to do so, such as having tidal heating or undergoing plate tectonics. This includes the high-profile rocky exoplanets discovered in the TRAPPIST-1 star system. Regardless, younger planets with temperate climates may be the simplest places to look for other Earths.”


Citation:
Team finds younger exoplanets are better candidates when looking for other Earths (2022, May 3)