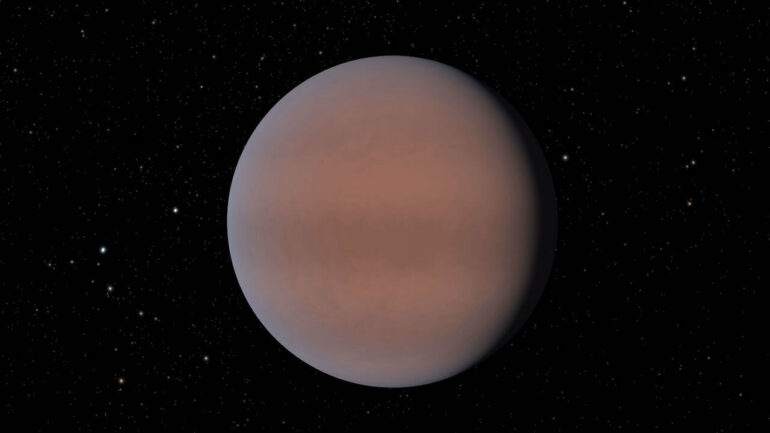 The recently discovered planet TOI-674 b, a bit bigger than Neptune and orbiting a red-dwarf star about 150 light-years away, is a member of an exclusive club: Exoplanets, or planets around other stars, known to have water vapor in their atmospheres. Many questions remain, such as how much water vapor its atmosphere holds. But TOI-674 b’s atmosphere is far easier to observe than those of many exoplanets, making it a prime target for deeper investigation.

The planet’s distance, size and relationship to its star make it especially accessible to spaceborne telescopes. At 150 light-years, it’s considered “nearby” in astronomical terms. The star itself, relatively cool and less than half as big around as our Sun, can’t be seen from Earth with the naked eye, but this too translates into an advantage for astronomers. As the comparatively large planet—in a size-class known as “super Neptune”—crosses the face of its smallish star, starlight shining through its atmosphere can be more easily analyzed by our telescopes. Those equipped with special instruments called spectrographs—including the just-launched James Webb Space Telescope—can spread this light into a spectrum, revealing which gases are present in the planet’s atmosphere.

The discovery grew from a partnership between the tried-and-true Hubble Space Telescope and TESS, NASA’s Transiting Exoplanet Survey Satellite, launched in 2018. The planet was first found by TESS, then its light spectrum was measured by Hubble. Data from the now-retired Spitzer Space Telescope also helped astronomers tease out some of the planet’s atmospheric components. If the Webb telescope, once it’s up and running, is turned on TOI-674 b, it should be able to examine the planet’s atmosphere in far more detail.

Only three other Neptune-sized exoplanets have had aspects of their atmospheres revealed so far, though the advent of telescopes like Webb promises a golden age in the study of exoplanet atmospheres.

The new planet can claim membership in another exclusive group: inhabitants of the so-called “Neptune Desert.” TOI-674 b orbits its small star so tightly that a “year” on this planet, once around the star, takes less than two days. But among the thousands of exoplanets confirmed in our galaxy so far, a strange pattern has emerged: Planets in the size-class between Neptune and Jupiter are extremely rare in orbits of three days or less. The rarity of such planets, and the analysis of those that do turn up, could provide important clues to the formation of planetary systems in general—including our own.

An international team of scientists, led by Jonathan Brande of the University of Kansas, contributed to the new study of water vapor on TOI-674 b, which has been submitted to an academic journal. They included researchers from the NASA Ames Research Center and from IPAC and other research centers at Caltech.