Before horses, ass hybrids were bred for warfare 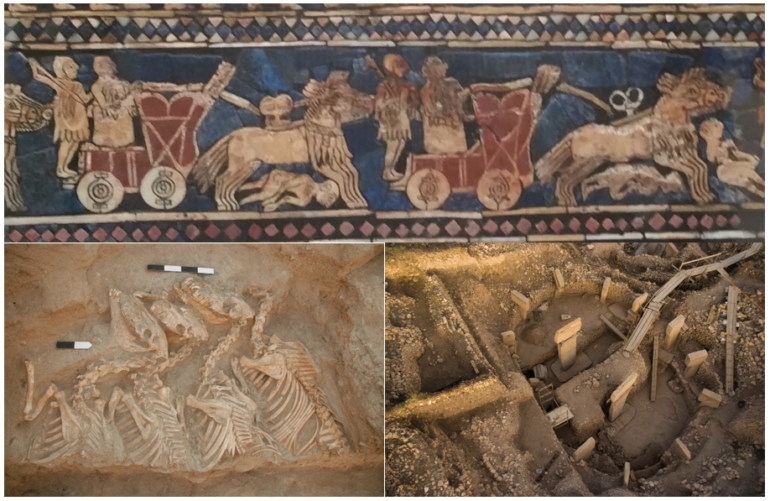 The 4,500-year-old iconography and texts from Mesopotamia show that the elite used equids for travel and warfare; however, the nature of these animals remained mysterious. In Science Advances (January 14, 2022), a team from the Institut Jacques Monod (CNRS/Université de Paris) used ancient DNA to show that these animals were the result of crossing domestic donkeys with wild asses. This makes them the oldest known example of animal hybrids, which were produced by Syro-Mesopotamian societies 500 years before the arrival of domestic horses in the region.

Equids have played a key role in the evolution of warfare throughout history. Although domesticated horses did not appear in the Fertile Crescent until about 4,000 years ago, the Sumerians had already been using equid-drawn four-wheeled war wagons on the battlefield for centuries, as evidenced by the famous “Standard of Ur,” a 4,500-year-old Sumerian mosaic. Cuneiform clay tablets from this period also mention prestigious equids with a high market value called “kunga”; however, the precise nature of this animal has been the subject of controversy for decades.

A team of palaeogeneticists from the Institut Jacques Monod (CNRS/Université de Paris) has addressed this question by studying the equid genomes from the 4,500-year-old princely burial complex of Umm el-Marra (northern Syria). On the basis of morphological and archaeological criteria, these animals, buried in separate installations, have been proposed to be the prestigious “kungas” by an archaeozoologist from the United States.

Although degraded, the genome of these animals could be compared to those of other equids: horses, domestic donkeys and wild asses of the hemione family, specially sequenced for this study. The latter includes the remains of an 11,000-year-old equid from the oldest known temple, Göbekli Tepe (south-east of present-day Turkey), and the last representatives of Syrian wild asses that disappeared in the early 20th century. According to the analyses, the equids of Umm el-Marra are first generation hybrids resulting from the cross of a domestic donkey and a male hemione. As kungas were sterile and the hemiones were wild, it was necessary each time to cross a domestic female with a previously captured hemione (capture represented on an Assyrian bas-relief from Nineveh).

Rather than domesticating the wild horses that populated the region, the Sumerians produced and used hybrids, combining the qualities of the two parents to produce offspring that were stronger and faster than donkeys (and much faster than horses) but more controllable than hemiones. These kungas were eventually supplanted by the arrival of the domestic horse, which was easier to reproduce, when it was imported to the region from the Pontic Steppe.

Citation:
Before horses, ass hybrids were bred for warfare (2022, January 14)