What ingredients went into the galactic blender to create the Milky Way? 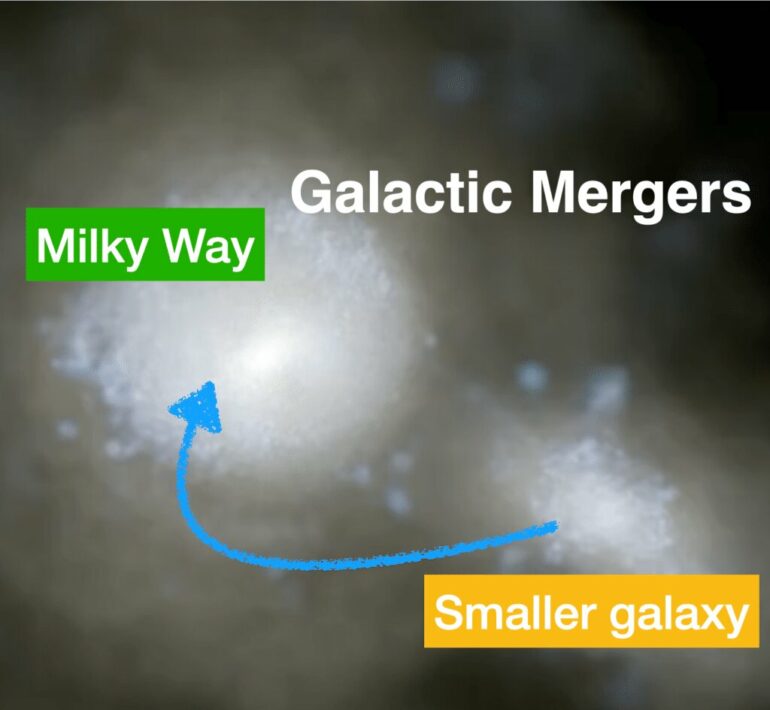 In its early days, the Milky Way was like a giant smoothie, as if galaxies consisting of billions of stars, and an enormous amount of gas had been thrown together into a gigantic blender.

But a new study picks apart this mixture by analyzing individual stars to identify which originated inside the galaxy and which began life outside.

“Although the Milky Way is our home galaxy, we still do not understand how it formed and evolved,” says researcher Sven Buder from the ARC Centre of Excellence for All Sky Astrophysics in 3 Dimensions (ASTRO 3D) and the Australian National University (ANU).

His paper, published this week in the Monthly Notices of the Royal Astronomical Society, analyzes the light from stars in detail, helping to understand what elements went into the creation of the Milky Way we know today.

“The Milky Way ate up lots of smaller galaxies but, until recently, we did not have enough evidence of that to say for sure,” Buder says.

“That’s because simple images of stars in our Milky Way look the same—whether they were born inside the galaxy or outside and then blended into the galaxy.”

Buder and colleagues in the Galactic Archaeology with HERMES (GALAH) team used Australia’s largest optical telescope, the Anglo-Australian Telescope (AAT), at Siding Spring Observatory to split light from more than 600,000 stars into wavelengths with the HERMES (High Efficiency and Resolution Multi-Element Spectrograph) instrument.

Within each of these rainbows are specific bands of light—rather like tiny unique barcodes—that vary depending on a star’s chemical composition.

“If an image is worth a thousand words, these spectra are worth more than a thousand pictures,” says Buder. “By ‘scanning’ these stellar barcodes, we measured how abundant 30 elements, such as sodium, iron, magnesium, and manganese, were, and how they appeared in different concentrations depending on where the star was born.”

This discovery is an early step towards reconstructing a picture of the “childhood” of the Milky Way to get an idea of the size of the galaxies that it consumed in the process.

“It could also help us understand how several of the features of the galaxy we know today came into being,” says Buder.

One mystery the new observations could help solve is why there are two distinct groups of stars in the disk that we see as the “milky” band in the night sky.

“The Milky Way spread out across the night sky is a familiar sight, and when we look at it, we are actually gazing into the center of our galaxy with its billions of stars,” says Buder.

“But we are looking at two populations of stars, one much older than the other. The old stars have moved so they look like they bulge out of the main plane of the Milky Way, while the younger stars form a much thinner band in the plane.

“But we don’t know why this has happened and our latest findings of the remnants of gigantic, galactic collisions may help us understand,” says Buder.

Buder’s paper provides the latest revelations relying on data from the Gaia project—an ambitious satellite mission to chart a three-dimensional map of the Milky Way to help understand its orbits, composition, formation, and evolution.

The Gaia satellite measurements can help us to find candidates of previously extragalactic stars, because they still move differently from a typical Milky Way star. But the extragalactic origin of a star can only be confirmed by its chemical fingerprint.

The GALAH survey is an Australian-led Large Observing Program using the HERMES instrument to obtain the highest spectral resolution multi-dimensional datasets for more than a million stars of all ages and locations in the Milky Way, to trace the full history of the galaxy.

Provided by
Science in Public


Citation:
What ingredients went into the galactic blender to create the Milky Way? (2022, February 22)