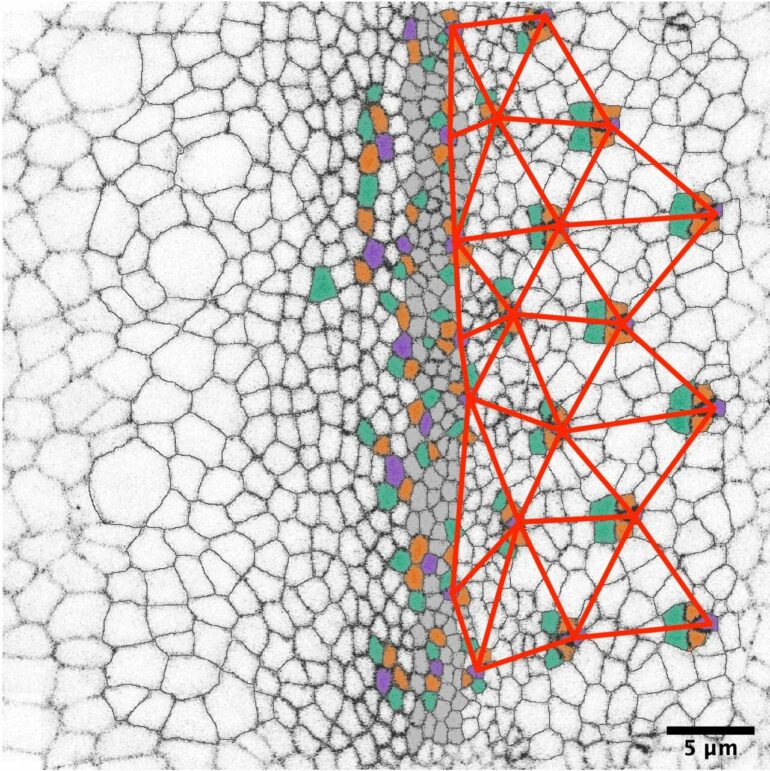 The ability of cells to self-organize into specific patterns in tissues that serve a function is a universal feature of life. The stripes of a zebra, our eyelashes, the spiral of seeds in a sunflower and the maze patterns of snakeskins are just a few examples.

Another well-known and much studied pattern is the compound eye of the fruit fly. This eye is a highly patterned hexagonal lattice of 800 clusters of photoreceptor cells. How does an amorphous blob of cells develop into this precise and familiar pattern?

Northwestern University researchers have discovered that the formation of the pattern involves mechanical forces, not just chemical signals transmitted between cells.Using first-of-its-kind live imaging, the researchers saw cells moving into position as the eye develops; the cells are not static as previously believed. This major discovery provides principles that should extend to other pattern systems.

“There is a constellation of patterns everywhere you look,” said Richard Carthew, professor of molecular biosciences in the Weinberg College of Arts and Sciences. “But there is no master artist. In this study we are trying to understand how one pattern—a pattern of great beauty—forms itself in the body. To our surprise, we found the cells are pushed and pulled into position with certain rules, like a chess game.”

The study will be published Feb. 22 in the online life sciences and biomedicine journal eLife.

Carthew and Madhav Mani, assistant professor of engineering sciences and applied mathematics at the McCormick School of Engineering, are co-corresponding authors of the paper. Kevin Gallagher, a Ph.D. student in molecular biosciences and a member of Carthew’s lab, is the paper’s first author.

“This work helps us better understand how life builds itself,” said Mani, a quantitative biologist. “The process is still mysterious. We study the fruit fly eye because it is a model system and has been leveraged to teach us a lot. There are amazing engineering principles to learn from life. We approached this study with an open mind and have learned something new about self-assembly.”

“With our custom-built tools, we were able to see something no one else has seen before— a dynamic view of eye development,” said Gallagher, also a quantitative biologist. “That the cells were moving location was a complete surprise. What we saw didn’t add up to the historical paradigm. It’s pretty crazy.”

The multidisciplinary team used cutting-edge techniques developed by Gallagher to live-image and analyze the dynamics of the eye’s self-assembly. The researchers identified the novel mechanical dynamics that, in concert with the genetic and biochemical molecules, orchestrate the remarkable feat of bioengineering that the fly achieves.They also demonstrated that without the correct mechanical forces, the eye does not self-assemble properly.

In addition to the live imaging, in which the eye was kept alive outside the fly’s body, the success of the study depended on a computational tool Gallagher built to identify and track every single cell. This enabled the researchers to see where each cell goes over a period of 10 hours.Within a narrow zone, called the wavefront of patterning, there is a little cascade of cells where cells are pushed, then stop and push other cells into the right position, with the familiar hexagonal lattice emerging.

“Scientists have tried for 50 years to visualize the developing eye,” said Carthew, an experimental biologist who has long studied fruit fly eyes. “It’s only by watching a movie in real time that you can understand what occurs. Kevin is the first person to achieve this.”

The research findings could be used in bioengineering to make synthetic visual sensors, Carthew said, in addition to helping scientists better understand how patterns form in nature.

How a viral RNA changes shape to hijack host cells

“If we ever hope to get to a point of being able to do ‘true’ bioengineering, as we engineer with inert matter, then understanding the connection between the mechanical and chemical principles in play is a must,” Mani said.