A better estimate for tick numbers with ‘citizen science’ data 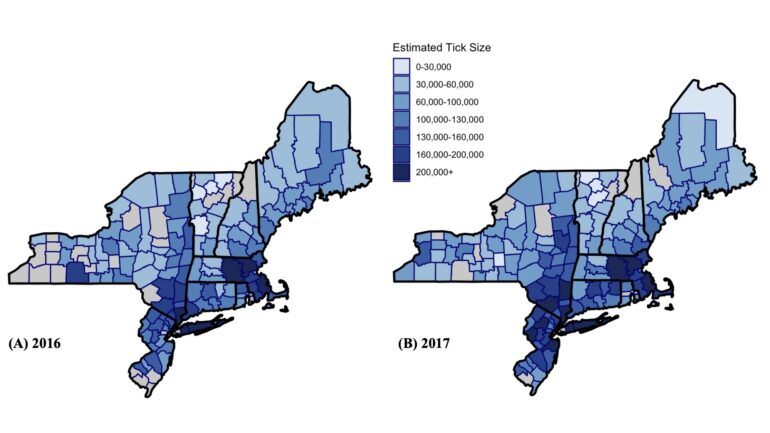 Apps and websites like eBird and iNaturalist encourage members of the public to report their observations on everything from songbird migration patterns to the presence of new planets. The result is massive datasets that far outmatch what professionally trained scientists could collect, at least in terms of quantity. However biases in the quality of data collected by “citizen scientists” sometimes prevent it from being used to address foundational scientific questions.

A new study led by Tam Tran, who earned her doctoral degree working with Dustin Brisson of Penn’s Department of Biology in the School of Arts & Sciences, taps into this wealth of citizen science data, identifying a strategy for correcting its biases to increase its value to science. Tran and colleagues applied this method to a large dataset documenting Ixodes scapularis, the black-legged tick, the vector of Lyme disease. The result is the most comprehensive look to date at the tick’s distribution across the northeastern United States.

They shared their findings in the Journal of the Royal Society Interface.

“Normally with citizen science data you can validate it by controlling for characteristics that describe the collector: their level of education, their experience collecting, and so on,” says Tran, who is now completing her medical degree at Virginia Commonwealth University. “But we didn’t have that data. Instead we found we could use county-level data on demographics and a few other factors to successfully correct the biases in this data. Doing that, we were able to create currently the most updated map of tick abundance across the Northeast.”

The new tick maps could help guide efforts to raise awareness about Lyme disease risks and the importance of checking for ticks after spending time in areas of tick habitat.

“This was a brilliant project idea hatched by two clever graduate students during a poster session at an international conference,” says Brisson. “Combining data collected by the public with scientifically collected data into statistical models has allowed them to identify and correct collection biases and to harness the wealth of data collected by anyone to address scientifically important hypotheses.”

Tran, as a clinician-scientist in training, is interested in how alterations in the environment, such as climate change, may impact health. She joined Brisson’s lab, which focuses in part on the ecology and evolution of Lyme disease, in order to pursue these questions focused on the effect of climate change on tick-borne diseases.

Brisson’s lab frequently collaborates with scientists from the New York State Department of Health (NYSDOH) who have been collecting black-legged ticks for nearly two decades, tracking an expansion in geographic range that has occurred during that time frame. Their active surveillance program has collected more than 85,000 ticks across the state.

At a conference in Scotland in 2018, Tran found out about a service based at Northern Arizona University and supported by the Bay Area Lyme Foundation, through which citizen scientists could submit ticks to be identified and tested for the presence of pathogens. Over four years (2016—2019), this program received more than 20,000 ticks from 49 U.S. states and Puerto Rico, a more than six-fold increase over the program’s initial estimates of the number of ticks they would receive. Researchers including Daniel J. Salkeld of Colorado State University and W. Tanner Porter, who is currently with Translational Genomics Research Institute, both authors on the current work, published findings using that data documenting the presence of ticks capable of carrying Lyme and other tick-borne diseases in 83 counties (in 24 states) where these ticks had not been previously recorded.

While there were rough correlations between the NYSDOH data and the citizen science data from New York, Tran and colleagues saw an opportunity to determine how to account and correct for biases within the latter dataset. Because data about individual collectors was limited, aside from their county of residence, the researchers used publicly available data from Census records on county-level variables, including median household income, population size, poverty level, race, education, and age distribution, each of which has been correlated with Lyme disease risk.

To account for familiarity with Lyme disease, the researchers factored in the incidence of Lyme disease in the county and Google search trends, that is, the frequency of searches for “Lyme disease.” Finally, they included a modifier for the mean annual temperature of each county, as a proxy for how likely it would be for a collector to be out in nature, a variable that would increase the likelihood of finding a tick.

Accounting for these variables, some of which were associated with over-counting and others with under-counting ticks, “made the citizen science data align so much better with the New York State Department of Health data,” says Tran.

Extending their model to the whole of the northeastern U. S., the researchers developed a map of tick population per county that is the most robust to date.

“This is a predictor of tick abundance from Maine down to New Jersey, validated with the incredible active surveillance data from New York,” Tran says. “It’s an exciting way to address big scientific questions that overcomes the limitations that sometimes get in the way of doing professional science at this scale, like time, money, and geographic location.”

Single-cell tools give insight into active antibiotic resistome in soils

With the U.S. Centers for Disease Control and Prevention noting a rapidly growing incidence of tick-borne diseases, Tran says data collected by member of the public can help predict where Lyme disease is most likely to impact residents.

“It’s a way to use citizen science that we haven’t seen before,” she says.