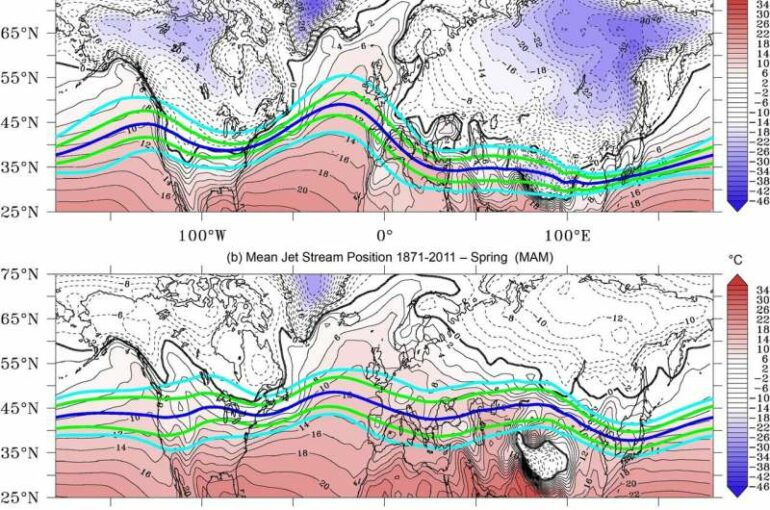 New research from the University of Southampton shows that the winter jet stream over the North Atlantic and Eurasia has increased its average speed by 8% to 132 miles per hour. The jet stream, which this week brought storms Dudley, Eunice and Franklin to the UK, has also has moved northwards by up to 330 kilometers.

Jet streams are fast bands of air which flow around the globe at about ten thousand meters above Earth’s surface. They have a significant influence on storm activity and temperature patterns across the northern hemisphere which can impact the weather through strong winds and flooding events. This is the longest regional study of the northern hemisphere jet stream and the trends observed are potential indicators of climate change.

The new study, published in Climate Dynamics, provides a comparison of the Northern Hemisphere jet stream across oceans and continents and finds that jet stream trends vary on a regional and seasonal basis. Between 1871 and 2011 the average winter movement in jet stream latitude over the North Atlantic was from 44° to 47° north with a 10 miles per hour increase in speed, but no increases were observed over the North Pacific.

The study was led by Dr. Samantha Hallam, from the Maynooth University in Ireland whilst she was undertaking a Ph.D. at the University of Southampton.

Dr. Hallam said: “Significant increases in winter jet latitude and speed are observed over the North Atlantic and Eurasia. These changes are consistent with the decreasing temperature and increasing pressure gradients observed between the equator and the Arctic over the period, and likely associated with the warming Arctic winters.”

The results highlight that northern hemisphere jet variability and trends differ on a regional basis across the North Atlantic, North Pacific, Eurasia and North America. This is important for making climate predictions and in developing plans to combat climate change.

These findings are the result of a statistical analysis of the 250mb jet stream using the Twentieth Century Reanalysis dataset.


Citation:
Jet stream that brought storm Eunice has been getting faster over last century (2022, February 22)