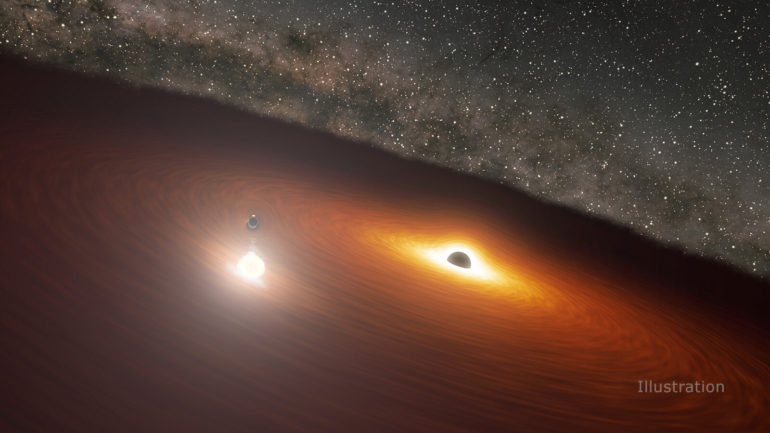 Black holes aren’t stationary in space; in fact, they can be quite active in their movements. But because they are completely dark and can’t be observed directly, they’re not easy to study. Scientists have finally figured out the precise timing of a complicated dance between two enormous black holes, revealing hidden details about the physical characteristics of these mysterious cosmic objects.

The OJ 287 galaxy hosts one of the largest black holes ever found, with over 18 billion times the mass of our Sun. Orbiting this behemoth is another black hole with about 150 million times the Sun’s mass. Twice every 12 years, the smaller black hole crashes through the enormous disk of gas surrounding its larger companion, creating a flash of light brighter than a trillion stars—brighter, even, than the entire Milky Way galaxy. The light takes 3.5 billion years to reach Earth.

But the smaller black hole’s orbit is oblong, not circular, and it’s irregular: It shifts position with each loop around the bigger black hole and is tilted relative to the disk of gas. When the smaller black hole crashes through the disk, it creates two expanding bubbles of hot gas that move away from the disk in opposite directions, and in less than 48 hours the system appears to quadruple in brightness.

Combined heat and power as a platform for clean energy systems

Because of the irregular orbit, the black hole collides with the disk at different times during each 12-year orbit. Sometimes the flares appear as little as one year apart; other times, as much as 10 years apart. Attempts to model the orbit and predict when the flares would…