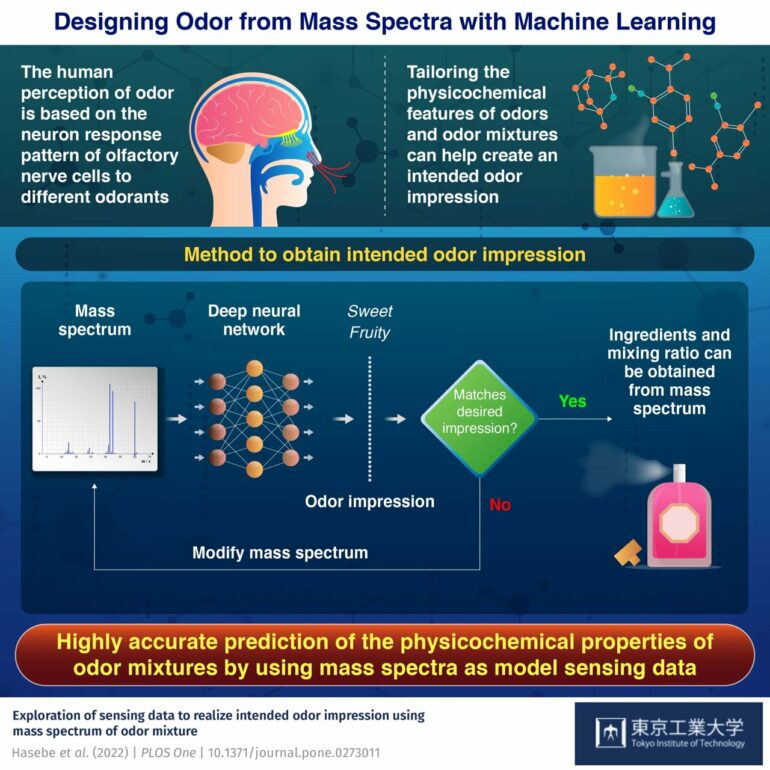 The sense of smell is one of the basic senses of animal species. It is critical to finding food, realizing attraction, and sensing danger. Humans detect smells, or odorants, with olfactory receptors expressed in olfactory nerve cells. These olfactory impressions of odorants on nerve cells are associated with their molecular features and physicochemical properties. This makes it possible to tailor odors to create an intended odor impression. Current methods only predict olfactory impressions from the physicochemical features of odorants. But, that method cannot predict the sensing data, which is indispensable for creating smells.

To tackle this issue, scientists from Tokyo Institute of Technology (Tokyo Tech) have employed the innovative strategy of solving the inverse problem. Instead of predicting the smell from molecular data, this method predicts molecular features based on the odor impression. This is achieved using standard mass spectrum data and machine learning (ML) models.

“We used a machine-learning-based odor predictive model that we had previously developed to obtain the odor impression. Then we predicted the mass spectrum from odor impression inversely based on the previously developed forward model,” explains Professor Takamichi Nakamoto, the leader of the research effort by Tokyo Tech. The findings have been published in PLOS ONE.

“For example, we show which molecules give the mass spectrum of apple flavor with enhanced ‘fruit’ and ‘sweet’ impressions. Our analysis method shows that combinations of either 59 or 60 molecules give the same mass spectrum as the one obtained from the specified odor impression. With this information, and the correct mixing ratio needed for a certain impression, we could theoretically prepare the desired scent,” says Prof. Nakamoto.

This novel method described in this study can provide highly accurate predictions of the physicochemical properties of odor mixtures, as well as the mixing ratios required to prepare them, thereby opening the door to endless tailor-made fragrances.