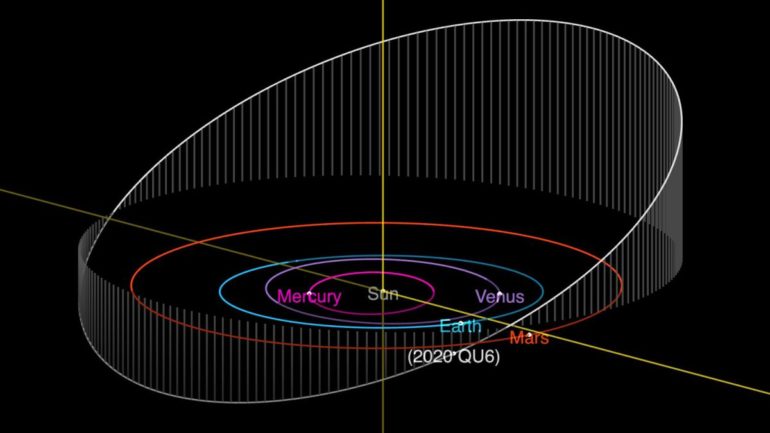 An amateur astronomer from Brazil discovered the large, “potentially hazardous” asteroid that safely passed by Earth this week on Thursday (Sept. 10).

The asteroid, called 2020 QU6, measures roughly 3,280 feet (1,000 meters) wide, or large enough to cause a global catastrophe if it were to hit Earth. However, it posed no risk to our planet as it travelled past the planet at a distance of more than 20 million miles (40 million kilometers), which is more than 100 times the distance between Earth and the moon, according to a statement from the Planetary Society.

“In the news, we hear more and more frequently about asteroid discoveries primarily because we are getting better at finding and tracking near-Earth asteroids,” Bruce Betts, chief scientist at The Planetary Society, said in the statement. “There aren’t suddenly more asteroids, we’re just getting better at seeing them.”

Asteroid 2020 QU6 was discovered on Aug. 27 by amateur astronomer Leonardo Amaral at the Campo dos Amarais observatory near Sao Paulo Brazil. In 2019, Amaral received an $8,500 grant from The Planetary Society to purchase better telescope equipment that would allow him to find, track, and characterize near-Earth objects (NEOs) more effectively.

Amaral’s location in the Southern Hemisphere also offers a unique vantage point for finding such a large asteroid, as many professional asteroid-hunting sky surveys are located in the Northern Hemisphere, according to the statement.

Facebook’s Zuckerberg says ‘there is a risk of civil unrest across the country,’ site will warn of premature election victory claims

While NASA and other major agencies track asteroids, the discovery of asteroid 2020 QU6 so close to its approach to Earth serves as a reminder for the need to support ground-based astronomers like Amaral. Casey Dreier, chief advocate and senior space policy adviser for The Planetary Society, also noted the importance of investing in new space-based capabilities, such as NASA’s NEO Surveillance Mission, or NEOSM, which is a space telescope designed to find and track threatening near-Earth objects.

“This discovery reminds us that even though we’ve found most large NEOs we haven’t found all of them,” Dreier said in the statement.