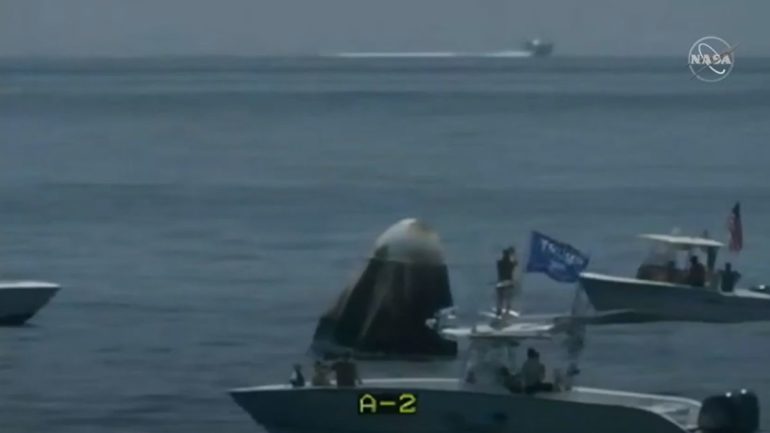 It was an unprecedented sight: A SpaceX capsule — the first to carry NASA astronauts  — bobbing in the Gulf of Mexico, surrounded by private boaters, one of them bearing a flag supporting President Donald Trump.

The SpaceX Crew Dragon Endeavour splashed down off the coast of Pensacola, Florida Sunday (Aug. 2), returning astronauts Bob Behnken and Doug Hurley to Earth after their historic Demo-2 test flight. But shortly after that splashdown, private boats swarmed the space capsule, apparently hoping for a closer look.

“That was not what we were anticipating,” NASA Administrator Jim Bridenstine said in a post-splashdown briefing. “After they landed, the boats just came in. We need to do a better job next time for sure.”

NASA TV views of the Crew Dragon showed many recreational boaters encroaching on SpaceX’s recovery zone, some of them floating quite close to the capsule. One of the boats had a Trump flag as it circled the capsule, while another had an American flag.

Bridenstine said the U.S. Coast Guard did clear the landing zone ahead of the splashdown, and the landing itself had no issues. The SpaceX recovery ship Go Navigator recovered the capsule about 30 minutes after splashdown, but not before the private boats arrived.

“That capsule was in the water for a good amount of time and those boats just made a beeline for it,” Bridenstine said. “There are things that we’re going to look at, that we need to do better at, for sure.”

SpaceX recovery crews in fast boats worked to push back the encroaching boaters….