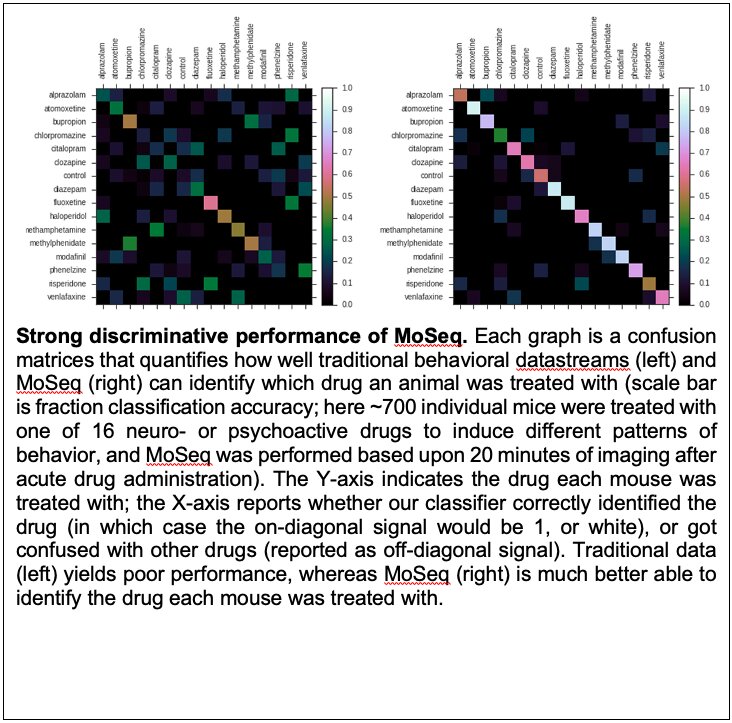 To ensure that they prescribe useful and effective treatments to individual patients, doctors should be aware of how different drugs or therapeutic strategies influence people’s behavior and neural functioning. As different drugs can have different effects on people based on their genetic and medical background, medical research should also try to identify patterns in how different substances affect different sub-groups of the population.

Several years ago, researchers at Harvard Medical School developed a machine-learning-based technique called motion sequencing (MoSeq) to study the behavior of animals and humans. This system is based on the pioneering work of renowned ethologists, who suggested that all animal behavior can be organized in modules, also referred to as syllables. These modules are essentially small, repeated motifs or stereotyped actions that the brain can arrange to create sequences, resulting in more sophisticated and coherent movement patterns.

Recently, the same team at Harvard Medical School showed that MoSeq can also be used to identify differences and similarities in the behavior elicited by a variety of neuroactive and psychoactive drugs. Their experiments, outlined in a paper published in Nature Neuroscience, were conducted on a large cohort of mice.

“MoSeq uses 3-D machine vision and machine learning techniques to discover recurrent modules—which we call syllables—in any given behavioral dataset,” Sandeep Robert Datta, one of the researchers who carried out the study, told Medical Xpress. “Over time, we began folding in improvements into the system. We wondered how we could decide whether the changes we were making were helpful or harmful, and realized that taking advantage of the ability of drugs to change behavior could be a useful tool for measuring how sharp our lens was.”

The ultimate goal of the recent work by Datta and his colleagues was to use MoSeq to gain a better understanding of how different pharmacological substances impact both neural systems and the behavior of animals. To do this, they administered doses of different neuroactive and psychoactive drugs to roughly 700 mice.

“Our data shows that thinking about behavior as being built by syllables and organized over time by a neurally-specified grammar provides a powerful window into brain function, one that is particularly apparent when considering the effects of drugs on brain circuits,” Datta said.

So far, Datta and his colleagues specifically tested the effectiveness of MoSeq for identifying behavioral patterns arising after different mice took different classes of drugs, including benzodiazepines, antidepressants, drugs for epilepsy, SNRIs, SSRIs and stimulants. They found that their system could effectively distinguish patterns of behavior arising from the intake of a specific drug, outperforming more conventional methods used to determine what pharmacological class a drug belongs to.

In their experiments, the researchers specifically used MoSeq to characterize drug-elicited behavioral changes that took place in a mouse model of autism spectrum disorder (ASD). This ultimately allowed them to assess the efficacy of both drugs that are commonly administered to patients affected by ASD and other potential drug candidates.

In the future, their machine-learning-based system could be used to explore the effects of different pharmacological drugs on the behavior of animals or humans presenting a given range of symptoms or with specific mental or physical disorders. This could lead to interesting discoveries, helping doctors worldwide to identify promising treatment strategies for a variety of health conditions.

“Based on the results we gathered so far, we are confident that we can identify behavioral fingerprints that characterize mouse models of disease and then assess on- and off-target effects of candidate therapeutics,” Datta said. “In addition, we are now extending MoSeq in many ways—improving its resolution, folding in additional types of behavioral data, looking at the behavioral syllables that characterize social behaviors and characterizing behaviors across species.”

Citation:
A technique to study the behavior elicited by neuroactive and psychoactive drugs (2020, October 30)
retrieved 2 November 2020
from https://medicalxpress.com/news/2020-10-technique-behavior-elicited-neuroactive-psychoactive.html