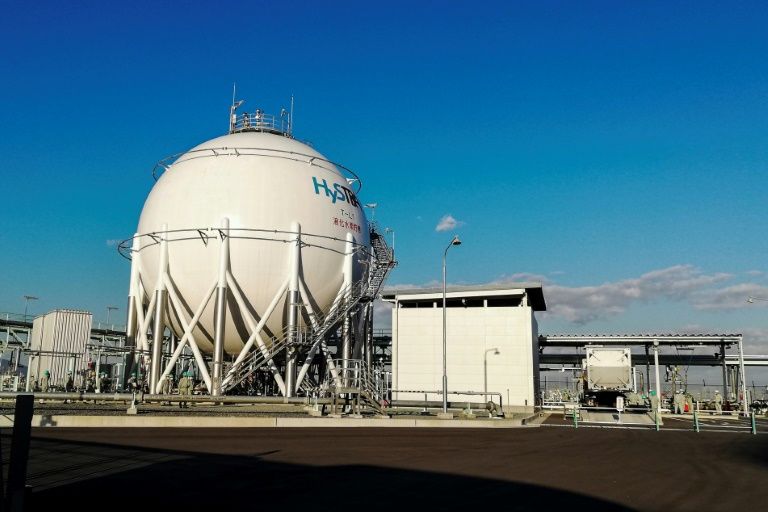 Japan’s new 2050 deadline for carbon neutrality has thrown a spotlight on its efforts to find new, greener fuel options, including an ambitious but controversial liquid hydrogen venture.

The Hydrogen Energy Supply Chain (HESC) is a joint Japanese-Australian project intended to produce plentiful, affordable fuel for Japan. Here are some questions and answers about the venture:

Japan has few fossil fuel resources, and relies heavily on imported liquified natural gas (LNG), coal and nuclear power, which has been curtailed since the Fukushima disaster.

The mountainous, natural disaster-prone country is struggling to ramp up its renewable energy production, and is therefore investigating a variety of fuel alternatives.

It has invested heavily in hydrogen, which produces only steam and no carbon dioxide when burnt, making it the focus of some interest.

It uses it in microfuel cells for residential buildings, experimental power plants and fuel cell vehicles, but production domestically is limited and expensive.

The Hydrogen Energy Supply Chain is an experiment to see whether Japan can establish a durable supply of liquid hydrogen from Australia, to be burned to generate electricity.

The hydrogen will be produced and liquified in the Australian state of Victoria, where it will be extracted from a type of coal known as lignite.

This so-called brown coal currently effectively lacks a market, making it a potentially attractive, cheaper alternative to domestic hydrogen production for Japan, despite the extra costs of bringing it 9,000 kilometres (5,600 miles) by sea.

The project’s pilot phase, partially funded by Japanese and Australian authorities, has received investment of around Aus$500 million ($350 million).

How will it work?

From next year, a site on an artificial island near Kobe in western Japan will become the pilot terminus for the world’s first ship designed to transport liquid hydrogen, a Japan-built vessel called the Suiso Frontier.

For now, the imposing spherical tank 19 metres (60 feet) in diameter on the site is being used to store domestically produced liquid hydrogen.

If the tests are successful by 2022 or 2023, the project will be extended and will enter a commercial phase after 2030. A new terminus in Japan will then be built, along with larger ships.

But the process is complicated: to be transported by sea as a liquid, hydrogen needs to be cooled to -253 degrees Celsius (-423.4 degrees Fahrenheit)—an expensive process that uses a lot of energy.

Hydrogen’s green credentials depends largely on how it is produced.

Green hydrogen can be manufactured by electrolysis of water, using electricity obtained through renewable energy.

But every tonne of hydrogen produced from coal emits 20 tonnes of carbon dioxide, more than double the CO2 emissions created when hydrogen is produced from natural gas.

Comparing the emissions from producing hydrogen to those from burning coal is complicated, experts say, but they agree that it won’t be considered environmentally friendly unless produced renewably.

HESC backers insist it can be environmentally viable—if not renewable—through carbon capture programmes.

Facebook removes video interview with Trump, citing his ban from the platform

One Australian initiative, called CarbonNet, would see the captured CO2 buried under the seabed near Victoria.

For HESC backers like Motohiko Nishimura of Kawasaki Heavy Industries, Japan’s 2050 carbon-neutral deadline “will have a great positive impact” on the project.

But not everyone in Japanese industry is convinced, including Shigeru Muraki, an executive at Tokyo Gas, who favours investment in ammonia fuel instead.

“Even with carbon capture and storage methods, it can’t be considered as green hydrogen,” he said, referring to the HESC project.

He sees green hydrogen produced from renewable sources as likely to become price competitive with time.

And environmentalists like Nicholas Aberle, from the campaign group Environment Victoria, are deeply sceptical.

They fear “a situation in which coal-to-hydrogen can only be made commercial without (carbon capture), and we can see greedy companies trying to push ahead despite the climate impacts,” he told AFP.

Commercial-scale hydrogen production from coal without carbon-capture would be “climate vandalism”, he said.

For hydrogen to be truly ‘clean’ it must be made with renewables, not coal