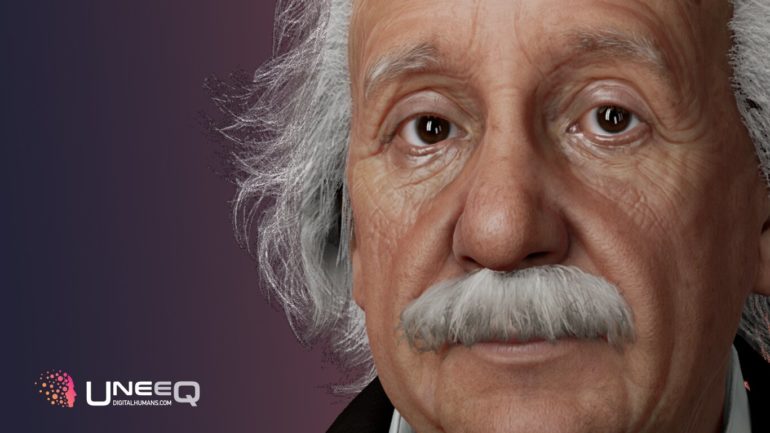 Both organizations intend to give users the opportunity to ask a life-like Einstein AI practical questions, just as if they were engaging the real-life physicist himself. The companies claim to have chosen Einstein due to his famous reputation as an actual genius, historical icon, technology enthusiast and someone they felt many people would actually want to ask many questions.

For the Einstein proof of concept, UneeQ has combined visual character rendering techniques with an advanced computational knowledge engine in order to make this prototype as realistic as possible. In terms of resurrecting an authentic voice based on the real Albert Einstein, however, researchers had little go on. The only accounts they managed to uncover from historical records reported Einstein to have a heavy German accent and that he spoke, slowly, wisely and kindly in a high-pitched tone.

Still, due to Einstein’s thick accent and the poor quality of the old recordings of his voice, development teams have struggled to capture a solid frame of reference for how he may have sounded. Fortunately, they expect not too many users will worry that much about the accuracy of Einstein’s voice when it comes to this new bot. Working off of this assumption, researchers plan to create a new voice for Einstein that, while maybe not identical to the voice of the physicist himself, will be come to be one that users of this bot recognize.

This new rendition of Einstein’s voice has the physicist still speaking with a German accent with an added sense of dry humor as well as a friendliness to reflect that of his real-life counterpart. In fact, researchers even gave this AI the ability to speak as if reflecting upon his own knowledge when interacting with users.

In addition to the voice cloning aspect, researchers also had to develop Digital Einstein to respond quickly to user questions, similar to a customer service chatbot or personal assistant. To achieve this, they created a real-time turnaround for input text received by the computational knowledge engine to Aflorithmic’s API. Since then, in only two weeks, the research teams managed to decrease the Einstein bot’s response time from 12 seconds to less than three seconds.

Overall, both companies predict the Digital Einstein project as just the beginning for the interactive potential of conversational AI with humans.

In AICybersecurity
on 27 October 20202 min read