Most People Can’t Tell The Difference Between Trump And Trump AI, Can You? 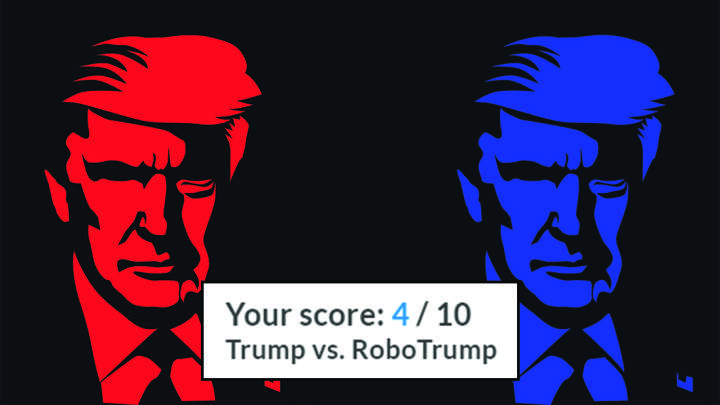 Sometimes, even when you hear the words coming out of Trump’s mouth with your own ears, it’s difficult to believe that they’re real things a sitting President has said. Remember, for instance, when he claimed that the noises of windmills cause cancer or repeatedly suggested we should nuke hurricanes?

Well, to muddy the waters even further, an artificial intelligence (AI) text generator has been used to replicate Trump’s particular – shall we say “distinctive” – speech pattern, and it turns out people can barely tell the difference.

Try for yourself to work out which one of these speeches is written by AI and which one is 100 percent real.

“So, that’s why I’ve been saying all along that, yes, I’d love to win. But, boy, do these guys want me to. These guys, they don’t talk about it. They say, ‘Donald Trump, please, please run.’ Because they’ll take away your tax cuts, because they’ll take away your regulation cuts. They’ll take them away. And, frankly, really, really bad things will happen with our country. Our country would go down very quickly. Very quickly, very, very rapidly. The Democrats want to turn back the clock, which is, essentially, what they’ve done. They’ve turned back. We’ve gone much further left than anybody thought possible.”

In AIApps and WebCompaniesSmartphones
on 5 September 20214 min read

The Democrats are the party of crime. They want to abolish ICE. And they don’t like it. You know, you have these people that come in – I mean, it’s incredible. We had a case recently where we got MS-13 out of our country. They’re not coming back in. It’s amazing. But we’re getting them out. We’re…