Direct sound printing is a potential game-changer in 3D printing, according to researchers 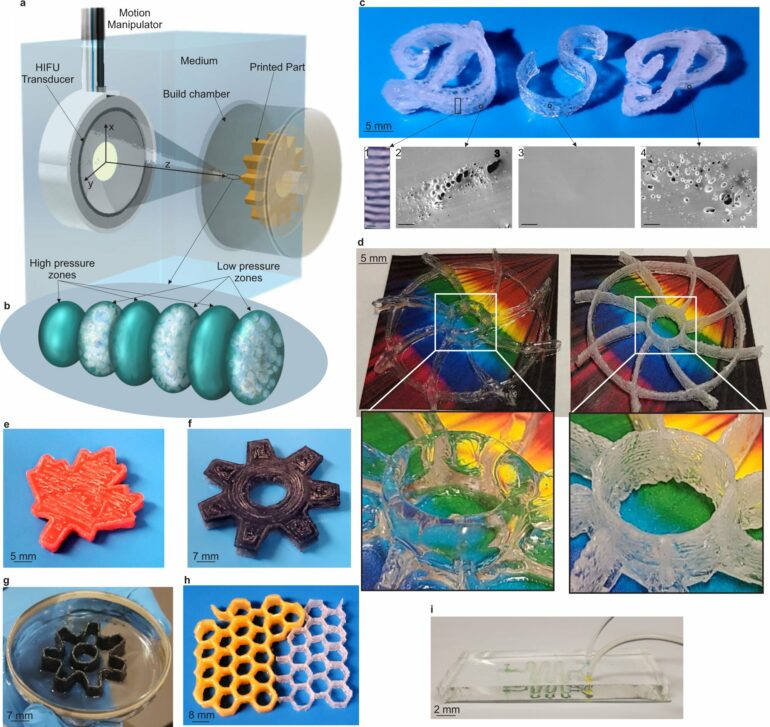 Most 3D printing methods currently in use rely either on photo (light)- or thermo (heat)-activated reactions to achieve precise manipulation of polymers. The development of a new platform technology called direct sound printing (DSP), which uses soundwaves to produce new objects, may offer a third option.

The process is described in a paper published in Nature Communications. It shows how focused ultrasound waves can be used to create sonochemical reactions in minuscule cavitation regions—essentially tiny bubbles. Extremes of temperature and pressure lasting trillionths of a second can generate pre-designed complex geometries that cannot be made with existing techniques.

“Ultrasonic frequencies are already being used in destructive procedures like laser ablation of tissues and tumors. We wanted to use them to create something,” says Muthukumaran Packirisamy, a professor and Concordia Research Chair in the Department of Mechanical, Industrial and Aerospace Engineering at the Gina Cody School of Engineering and Computer Science. He is the paper’s corresponding author.

As the researchers explain, DSP relies on chemical reactions created by fluctuating pressure inside tiny bubbles suspended in a liquid polymer solution.

“We found that if we use a certain type of ultrasound with a certain frequency and power, we can create very local, very focused chemically reactive regions,” Habibi says. “Basically, the bubbles can be used as reactors to drive chemical reactions to transform liquid resin into solids or semi-solids.”

The reactions caused by ultrasound-wave-directed oscillation inside the micro-sized bubbles are intense, though they only last picoseconds. The temperature inside the cavity shoots up to around 15,000 Kelvin and pressure exceeds 1,000 bar (the Earth’s surface pressure at sea level is around one bar). The reaction time is so brief the surrounding material is not affected.

The researchers experimented on a polymer used in additive manufacturing called polydimethylsiloxane (PDMS). They used a transducer to generate an ultrasonic field that passes through the build material’s shell and solidifies the targeted liquid resin and deposits it onto a platform or another previously solidified object. The transducer moves along a predetermined path, eventually creating the desired product pixel by pixel. The microstructure’s parameters can be manipulated by adjusting the duration of the ultrasound wave’s frequency and the viscosity of the material being used.

The authors believe that DSP’s versatility will benefit industries that rely on highly specific and delicate equipment. The polymer PDMS, for instance, is widely used in the microfluidics industry, where manufacturers require controlled environments (cleanrooms) and sophisticated lithographic technique to create medical devices and biosensors.

Aerospace engineering and repair can also benefit from DSP, as ultrasound waves penetrate opaque surfaces like metallic shells. This can allow maintenance crews to service parts located deep within an aircraft’s fuselage that would be inaccessible to printing techniques reliant on photoactivated reactions. DSP could even have medical applications for remote in-body printing for humans and other animals.

Scientists look to the sky in effort to mitigate carbon problem

“We proved that we can print multiple materials, including polymers and ceramics,” Packirisamy says. “We are going to try polymer-metal composites next, and eventually we want to get to printing metal using this method.”


Citation:
Direct sound printing is a potential game-changer in 3D printing, according to researchers (2022, May 31)