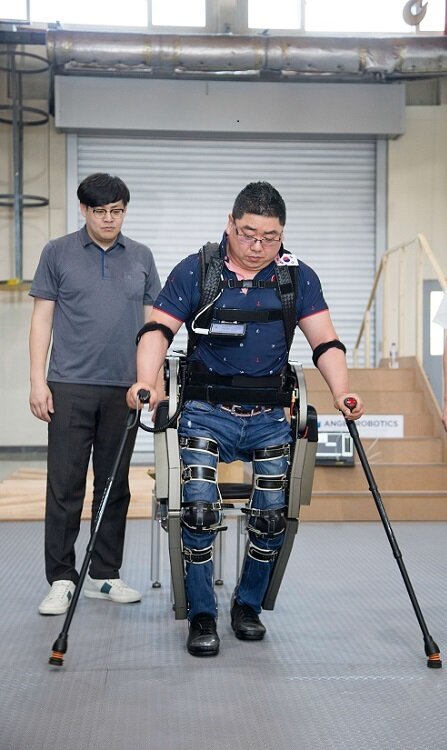 Standing upright and walking alone are very simple but noble motions that separate humans from many other creatures. Wearable and prosthetic technologies have emerged to augment human function in locomotion and manipulation. However, advances in wearable robot technology have been especially momentous to Byoung-Wook Kim, a triplegic for 22 years following a devastating car accident.

Now Kim and Professor Kong’s team are all geared up for the Cybathlon Championship 2020. Professor Kong and his startup, Angel Robotics, held a kickoff ceremony for Cybathlon 2020 at KAIST on June 24. The 2020 championship will take place in Switzerland.

Only individuals with complete paralysis of the legs resulting from spinal cord injuries are eligible to participate in the Cybathlon, which takes place every four years. Pilots compete against each other while completing everyday tasks using technical assistance systems in six different disciplines: a brain-computer interface race, a functional electrical stimulation bike race, a powered arm prosthesis race, a powered leg prosthesis race, a powered exoskeleton race, and a powered wheelchair race. The 2016 championship drew 66 participants from 56 teams representing 25 countries.

In AICompaniesStartups
on 8 June 20216 min read

In the powered exoskeleton race, pilots complete everyday activities such as getting up from a…