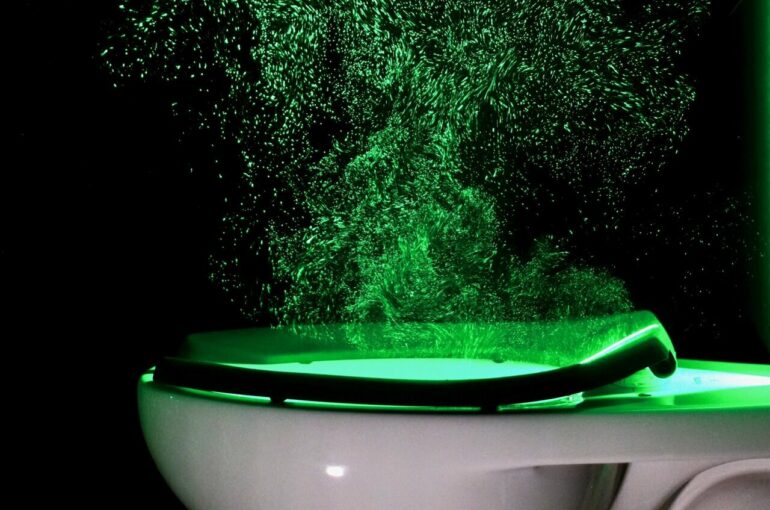 Thanks to new University of Colorado Boulder research, scientists see the impact of flushing the toilet in a whole new light—and now, the world can as well.

Using bright green lasers and camera equipment, a team of CU Boulder engineers ran an experiment to reveal how tiny water droplets, invisible to the naked eye, are rapidly ejected into the air when a lid-less, public restroom toilet is flushed. Published in Scientific Reports, it is the first study to directly visualize the resulting aerosol plume and measure the speed and spread of particles within it.

These aerosolized particles are known to transport pathogens and could pose an exposure risk to public bathroom patrons. However, this vivid visualization of potential exposure to disease also provides a methodology to help reduce it.

“If it’s something you can’t see, it’s easy to pretend it doesn’t exist. But once you see these videos, you’re never going to think about a toilet flush the same way again,” said John Crimaldi, lead author on the study and professor of civil, environmental, and architectural engineering. “By making dramatic visual images of this process, our study can play an important role in public health messaging.”

Researchers have known for over 60 years that when a toilet is flushed, solids and liquids go down as designed, but tiny, invisible particles are also released into the air. Previous studies have used scientific instruments to detect the presence of these airborne particles above flushed toilets and shown that larger ones can land on surrounding surfaces, but until now, no one understood what these plumes looked like or how the particles got there.

Understanding the trajectories and velocities of these particles—which can transport pathogens such as E. coli, C. difficile, noroviruses and adenoviruses—is important for mitigating exposure risk through disinfection and ventilation strategies, or improved toilet and flush design. While the virus that causes COVID-19 (SARS-CoV-2) is present in human waste, there is not currently conclusive evidence that it spreads efficiently through toilet aerosols.

“People have known that toilets emit aerosols, but they haven’t been able to see them,” said Crimaldi. “We show that this thing is a much more energetic and rapidly spreading plume than even the people who knew about this understood.”

The study found that these airborne particles shoot out quickly, at speeds of 6.6 feet (2 meters) per second, reaching 4.9 feet (1.5 meters) above the toilet within 8 seconds. While the largest droplets tend to settle onto surfaces within seconds, the smaller particles (aerosols less than 5 microns, or one-millionth of a meter) can remain suspended in the air for minutes or longer.

It’s not only their own waste that bathroom patrons have to worry about. Many other studies have shown that pathogens can persist in the bowl for dozens of flushes, increasing potential exposure risk.

“The goal of the toilet is to effectively remove waste from the bowl, but it’s also doing the opposite, which is spraying a lot of contents upwards,” said Crimaldi. “Our lab has created a methodology that provides a foundation for improving and mitigating this problem.”

Not a waste of time

Crimaldi runs the Ecological Fluid Dynamics Lab at CU Boulder, which specializes in using laser-based instrumentation, dyes and giant fluid tanks to study everything from how odors reach our nostrils to how chemicals move in turbulent bodies of water. The idea to use the lab’s technology to track what happens in the air after a toilet is flushed was one of convenience, curiosity and circumstance.

During a free week last June, fellow professors Karl Linden and Mark Hernandez of the Environmental Engineering Program, and several graduate students from Crimaldi’s lab joined him to set up and run the experiment.

They used two lasers: One shone continuously on and above the toilet, while the other sent out fast pulses of light over the same area. The constant laser revealed where in space the airborne particles were, while the pulsing laser could measure their speed and direction. Meanwhile, two cameras took high resolution images.

The toilet itself was the same kind commonly seen in North American public restrooms: a lid-less unit accompanied by a cylindrical flushing mechanism—whether manual or automatic—that sticks up from the back near the wall, known as a flushometer style valve. The brand-new, clean toilet was filled only with tap water.

They knew that this spur-of-the-moment experiment might be a waste of time, but instead, the research made a big splash.

“We had expected these aerosol particles would just sort of float up, but they came out like a rocket,” said Crimaldi.

The energetic, airborne water particles headed mostly upwards and backwards towards the rear wall, but their movement was unpredictable. The plume also rose to the lab’s ceiling, and with nowhere else to go, moved outward from the wall and spread forward, into the room.

The experimental setup did not include any solid waste or toilet paper in the bowl, and there were no stalls or people moving around. These real-life variables could all exacerbate the problem, said Crimaldi.

They also measured the airborne particles with an optical particle counter, a device that sucks a sample of air in through a small tube and shines a light on it, allowing it to count and measure the particles. Smaller particles not only float in the air for longer, but can escape nose hairs and reach deeper into one’s lungs—making them more hazardous to human health—so knowing how many particles and what size they are was also important.

While these results may be disconcerting, the study provides experts in plumbing and public health with a consistent way to test improved plumbing design and disinfection and ventilation strategies, in order to reduce exposure risk to pathogens in public restrooms.

“None of those improvements can be done effectively without knowing how the aerosol plume develops and how it’s moving,” said Crimaldi. “Being able to see this invisible plume is a game-changer.”

Additional authors on this publication include: Aaron True, Karl Linden, Mark Hernandez, Lars Larson and Anna Pauls of the Department of Civil, Environmental, and Architectural Engineering.


Citation:
Scientists shine a light on what comes up when you flush (video) (2022, December 8)