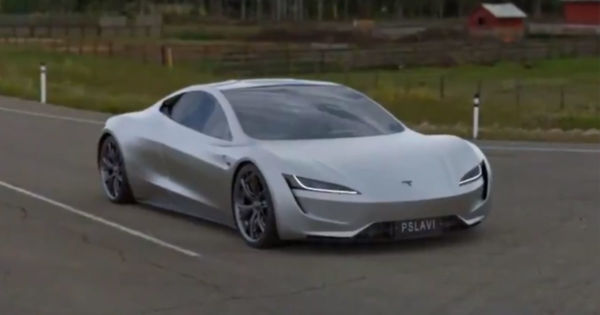 A new simulation by CGI artist Slave Popovsky shows what a Tesla Roadster accelerating from 0 to 60 mph in a blistering 1.1 seconds could look like — thanks to the addition of SpaceX thrusters, which Elon Musk has teased previously.

This is how fast 1.1 seconds 0 – 60mph take off should look like with Space X package thrusters on the Tesla Roadster. Computer worked out physics and then visualised in a render animation. Not sure how much gas but threw the effect in anyway. Enjoy @elonmusk #tesla #spacex pic.twitter.com/VzMukQPT2E

Shaving that down to 1.1 seconds, however, would make it far and away the fastest accelerating consumer car on the planet. The fastest production cars have only been inching closer to the two second mark in zero-to-60 mph acceleration over the past few years.

In a June 2019 interview with the Ride the Lightning podcast, Musk elaborated on the “SpaceX package,” claiming that it could give the Roadster a staggering three Gs of thrust.

“If you have three Gs of thrust, you can go in any direction,” he said on the podcast at the time, as quoted by Electrek. “You can go up and accelerate with still more than 2 Gs.”

Such a SpaceX package would be so…