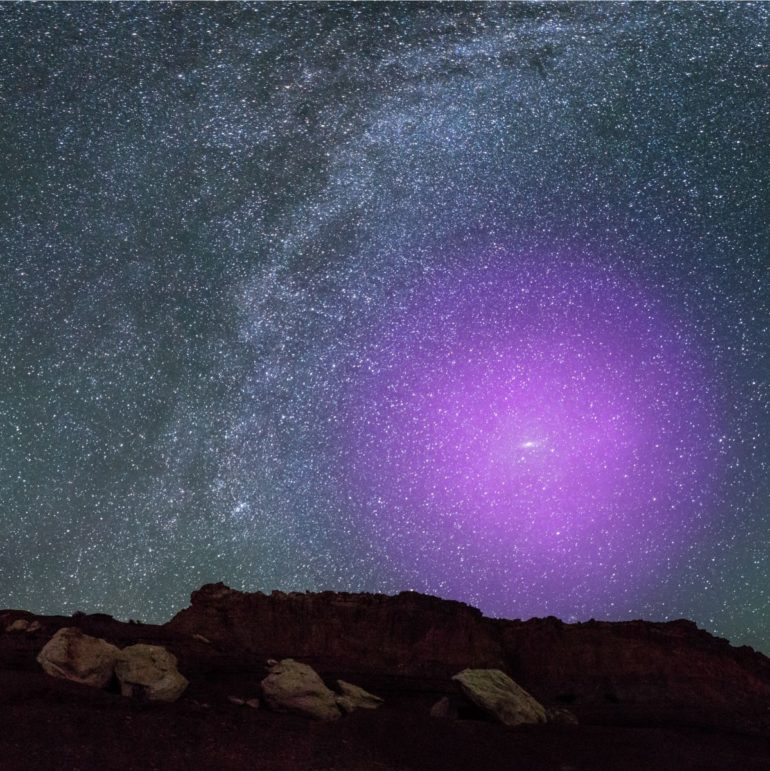 Galactic halos are both more massive and more complicated than scientists realized, according to new observations from the Hubble Space Telescope.

The venerable telescope turned its sights on the neighboring Andromeda galaxy using dozens of different quasars to map the galactic halo. Andromeda, more formally known as M31, is a spiral-shaped galaxy about the same size of the Milky Way galaxy we live in, with about 1 trillion stars. Cosmically, it’s right next door, just 2.5 million light-years away, which means that Hubble can study its halo in unprecedented detail.

“This is truly a unique experiment because only with Andromeda do we have information on its halo along not only one or two sightlines, but over 40,” lead researcher Nicolas Lehner, an astrophysicist at the University of Notre Dame in Indiana, said in a NASA statement. “This is groundbreaking for capturing the complexity of a galaxy halo beyond our own Milky Way.”

Those sightlines are built by the active black holes that lie at the heart of galaxies on the opposite side of Andromeda. These objects, called quasars, produce lots of light and it’s easier for scientists to study how gasses in the halo absorb some of that light than it is to study the halo itself. So Hubble turned its ultraviolet gaze to 43 different quasars beyond Andromeda and analyzed their light in order to map gaseous charged carbon, silicon and oxygen in the halo.

The Andromeda galaxy’s halo isn’t just a convenient target; scientists also think that, given the other similarities between our neighbor and our own galaxy, Andromeda’s halo may teach us about the Milky Way’s own halo, which is difficult to study from within the galaxy.

“Understanding the huge halos of gas surrounding galaxies is immensely important,” Samantha Berek, who worked on the research as an undergraduate at Yale University in Connecticut, said in the statement. “This reservoir of gas contains fuel for future star formation within the galaxy, as well as outflows from events such as supernovas. It’s full of clues regarding the past and future evolution of the galaxy, and we’re finally able to study it in great detail in our closest galactic neighbor.”

The researchers found that the halo itself stretched much farther across space than they had expected it to, a whopping 1.3 million light-years out from the galaxy — and, at some spots, more like 2 million light-years. If human eyes could see it, it would be three times as wide as the Big Dipper, according to NASA. In starker terms, Andromeda’s halo covers more than half the distance between Andromeda and the Milky Way, suggesting that the two halos intermingle.

The new research also found that the structure of Andromeda’s halo is also more complicated than previously expected, with two distinct layers. “We find the inner shell that extends to about a half million light-years is far more complex and dynamic,” Lehner said. “The outer shell is smoother and hotter.”

Lehner and his colleagues suspect that the halo’s two-part structure may have been caused by stellar explosions called supernovas within Andromeda’s main disk, which would more dramatically affect the inner portion of the halo, riling it up, than the outer. Supernovas are also a key mechanism for spreading heavy elements, like the ones the researchers identified in this study, across the cosmos.

The research relied on Hubble’s ability to see in ultraviolet light, which is a rare talent among current space telescopes. But even Hubble can only create such a detailed map of the halos of very close galaxies; most other galaxies don’t have enough observable quasars lurking on their far sides for the telescope to focus on.

But if we’re only going to get a good look at one galactic halo, it may as well be the one that overlaps with our own. And, eventually, we’ll be even closer to Andromeda’s halo, since our two galaxies are slowly catapulting toward each other and will collide in a few billion years.

The research is described in a paper published on Aug. 27 in The Astrophysical Journal.