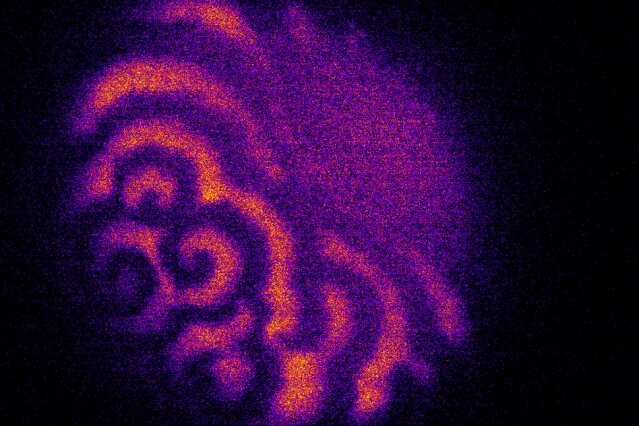 When an egg cell of almost any sexually reproducing species is fertilized, it sets off a series of waves that ripple across the egg’s surface. These waves are produced by billions of activated proteins that surge through the egg’s membrane like streams of tiny burrowing sentinels, signaling the egg to start dividing, folding, and dividing again, to form the first cellular seeds of an organism.

Now MIT scientists have taken a detailed look at the pattern of these waves, produced on the surface of starfish eggs. These eggs are large and therefore easy to observe, and scientists consider starfish eggs to be representative of the eggs of many other animal species.

In each egg, the team introduced a protein to mimic the onset of fertilization, and recorded the pattern of waves that rippled across their surfaces in response. They observed that each wave emerged in a spiral pattern, and that multiple spirals whirled across an egg’s surface at a time. Some spirals spontaneously appeared and swirled away in opposite directions, while others collided head-on and immediately disappeared.

The behavior of these swirling waves, the researchers realized, is similar to the waves generated in other, seemingly unrelated systems, such as the vortices in quantum fluids, the circulations in the atmosphere and oceans, and the electrical signals that propagate through the heart and brain.

“Not much was known about the dynamics of these surface waves in eggs, and after we started analyzing and modeling these waves, we found these same patterns show up in all these other systems,” says physicist Nikta Fakhri,…