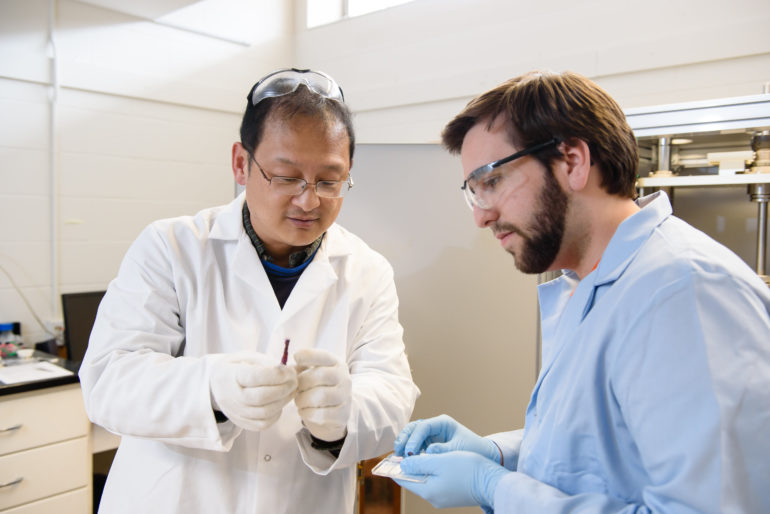 A Clemson University physicist has joined forces with collaborators from China and Denmark to create a new and potentially paradigm-shifting high-performance thermoelectric compound.

A material’s atomic structure, which is how atoms arrange themselves in space and time, determines its properties. Typically, solids are crystalline or amorphous. In crystals, atoms are in an orderly and symmetrical pattern. Amorphous materials have randomly distributed atoms.

Clemson researcher Jian He and the international team created a new hybrid compound in which the crystalline and amorphous sublattices are intertwined into a one-of-a-kind crystal-amorphic duality.

“Our material is a unique hybrid atomic structure with half being crystalline and half amorphous,” said He, an associate professor in the College of Science’s Department of Physics and Astronomy. “If you have a unique or peculiar atomic structure, you would expect to see very unusual properties because properties follow structure.”

The high-profile energy research journal Joule published their findings in a paper titled “Thermoelectric materials with crystal-amorphicity duality induced by large atomic size mismatch,” which appeared online on April 16 ahead of the May 19 issue.

The researchers created their hybrid material by intentionally mixing elements in the same group on the periodic table but with different atomic sizes. Here, they used the atomic size mismatches between sulfur and tellurium and between copper and silver to create a new compound (Cu1-xAgx)2(Te1-ySy) in which the crystalline and amorphous sublattices intertwine into a one-of-a-kind crystal-amorphicity duality. The new compound exhibited excellent thermoelectric performance.

While this discovery doesn’t directly impact application now, it is likely to lead to better thermoelectrics in the future.

“The new material performs well, but more important than that is how it achieves that level of performance,” He said. “Traditionally, thermoelectric materials are crystals. Our material is not pure crystal, and we show we can achieve the same level of performance with a material with a new atomic structure.”

He said he expects the new material will begin affecting applications in 10 to 20 years.

“They definitely can do something current thermoelectric materials cannot do, but not now,” He said. “However, the future of this research is bright.”

In addition to He, the research involved scientists from Shanghai Jiaotong University, Shanghai Institute of Ceramics and SUSTech in China, and Aarhus University in Denmark.

How schools of ‘microswimmers’ can increase their cargo capacity