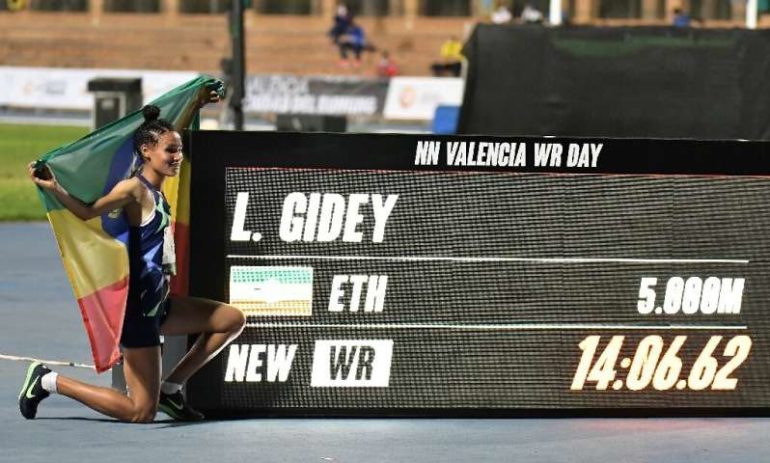 The unwavering advance of technology continues unabated in athletics as two long-standing world records were obliterated within an hour at the same meeting by runners wearing Nike’s controversial track spikes and guided by pacemaking lights.

At a stadium in Valencia that was almost empty because of coronavirus restrictions, Ugandan Joshua Cheptegei smashed the men’s 10,000m world record on Wednesday, clocking 26min 11.00 sec to slice an astonishing six seconds off the mark set in 2005 by Kenenisa Bekele.

Cheptegei’s performance came after Ethiopia’s Letesenbet Gidey chalked off an equally remarkable four seconds from the previous record for the women’s 5,000m set by Tirunesh Dibaba in 2008. Gidey was timed in 14:06.62.

Two world records in highly competitive events set in one heady hour did not just come about by accident.

They were premeditated and both performances factored in the latest technological advances, something that threatens to produce a rash of new marks, just as swimming had its record book rewritten with the introduction of the full-body suits that were later banned.

Both Cheptegei and Gidey were wearing Nike ZoomX Dragonfly spikes, a super-light shoe with a rigid plate and a unique foam that lends a propulsive sensation to every stride.

Critics claim the shoes are the equivalent of mechanical doping, while supporters hail them as a revolutionary technical advance.

The spikes, nevertheless, are approved by track and field’s governing body.

Not only were the two athletes wearing the controversial Nike spikes, but they had a team of metronomic pacemakers around them who utilised Wavelight technology—a trackside visual time guidance system which lights up to indicate the world record pace.

“It will likely be here to stay for record attempts,” Geoff Burns, a biomechanics and sport performance researcher at the University of Michigan, told AFP of the Wavelight.

“Like the shoes, I’m very torn on it – on one hand it’s incredible for the fans, as it makes the race against the clock very tangible, engaging the viewer in that continuous battle.

“On the other hand, it offloads the psychological challenge of driving a pace from the athlete, which is one of the great, beautiful challenges of running. It also nullifies big momentum swings, as the feedback is continuous.”

Cheptegei’s effort in the 10,000m caps an extraordinary year for the 24-year-old Ugandan, whose chains have been unshackled on the track following the Covid-19-enforced postponement of the Tokyo Olympics. If the Games had gone ahead this year he would have doubtless been focusing on medals rather than seeking world records.

“I do believe these one-off record-attempt races are a reaction to the pandemic,” Amby Burfoot, winner of the 1968 Boston marathon and a former editor-in-chief of Runner’s World magazine, said.

“They can’t supplant the best real competitions. In a time trial, if it doesn’t go well, everyone loses. In a real competition, someone always wins, even if they don’t set a record.”

That was preceded by a world record over the 5km road race, also in Monaco, in February.

After taking Bekele’s 5,000m record in Monaco, Cheptegei insisted that technological advances were part and parcel of track, and it was up to each era of athletes to embrace them.

“So every time, we have to accept the new developments in the sport, the new technology.”

University of Michigan’s Burns, who competes internationally in ultra-marathons, added that “it is certainly seeming like the cat’s out of the bag”.

“We just need to reset our expectation of what ‘good’ times and performances are,” Burns told AFP.

“For all, athletes, fans, and critics, we just need to readjust our lens a bit about what a top-class performance is, perhaps defining them relative to this era.”

And Burns expected more records to tumble over the coming years.

“On one hand, it’s cool to see the records set in an era when we have a bit more confidence in their credibility (with better anti-doping controls),” he said.

“But on the other hand, it speaks to the effect of the equipment as well.”

That said, Burfoot argued that Cheptegei and Gidey’s new marks would stand for some time.

“They will not be easy to break,” he said. “They are very substantial records.”