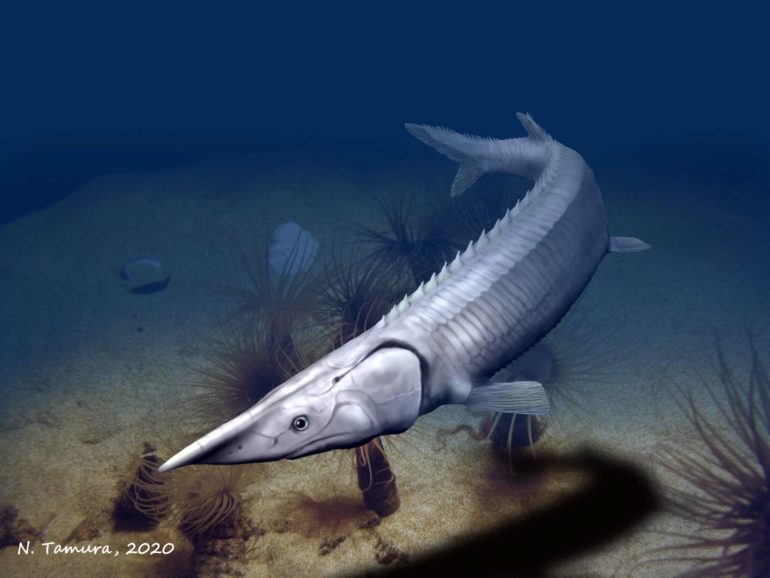 Sturgeon, a long-lived, bottom-dwelling fish, are often described as “living fossils,” owing to the fact that their form has remained relatively constant, despite hundreds of millions of years of evolution.

In a new study in the Zoological Journal of the Linnean Society, researchers led by Jack Stack, a 2019 University of Pennsylvania graduate, and paleobiologist Lauren Sallan of Penn’s School of Arts & Sciences, closely examine the ancient fish species Tanyrhinichthys mcallisteri, which lived around 300 million years ago in an estuary environment in what is today New Mexico. Although they find the fish to be highly similar to sturgeons in its features, including its protruding snout, they show that these characteristics evolved in a distinct evolutionary path from those species that gave rise to modern sturgeons.

The find indicates that, although ancient, the features that enabled Tanyrhinichthys to thrive in its environment arose multiple times in different fish lineages, a burst of innovation that was not previously fully appreciated for fish in this time period.

“Sturgeon are considered a ‘primitive’ species, but what we’re showing is that the sturgeon lifestyle is something that’s been selected for in certain conditions and has evolved over and over again,” says Sallan, senior author on the work.

“Fish are very good at finding solutions to ecological problems,” says Stack, first author on the study, who worked on the research as a Penn undergraduate and is now a graduate student at Michigan State University. “This shows the degree of…