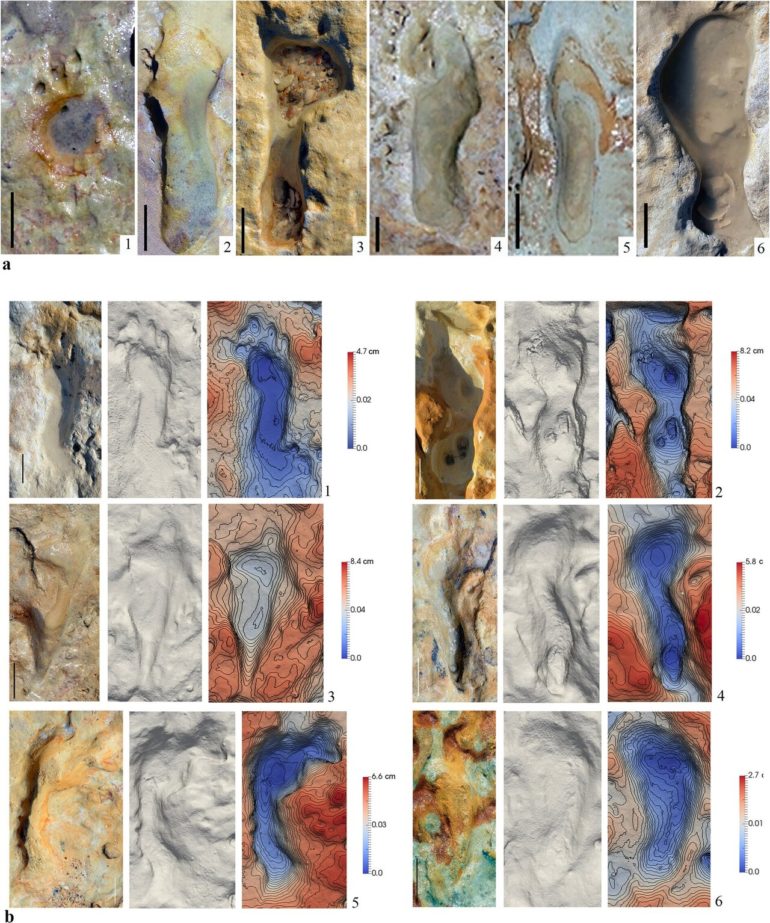 A team of researchers from Spain, Argentina and France has identified 87 Neanderthal footprints found on an ancient shoreline on the Iberian Peninsula. In their paper published in the journal Scientific Reports, the group describes their study of the footprints and what they learned about them.

Neanderthals lived in parts of the Middle East and Europe from 400,000 to 40,000 years ago. During that time, they left behind a lot of evidence of their existence—primarily their bones and crafted objects such as stone tools. Sometimes, though, they also left behind evidence of their activities, such as walking along a beach next to a body of water. In this new effort, the researchers have found evidence of as many as 36 individuals walking along a beach—including children.

The work involved studying footprints left on Matalascañas beach, in Doñana National Park, in Spain. Prior work there had involved footprints left by animals. When Neanderthal footprints were discovered, the researchers began studying them using a variety of techniques, including filming from above using drones and digital scanning to create three-dimensional renderings.

In all, the team found 87 Neanderthal footprints in what is now sedimentary rock. Testing of materials in the rock showed the footprints to be approximately 106,000 years old. They were only recently revealed due to recent heavy rains in the area. Prior evidence showed that the area was once an inland watering hole.

The researchers were able to work out the differences between the individuals who made the footprints by carefully measuring their size and the depth of the prints they created as they walked. They found that they included 25 adults—14 male and five female—and 11 children. They were unable to make determinations for six individuals. The depth of the prints also helped in estimating the size of the individuals that made them, all of which fell into the average range of four to five feet tall, except one—an individual who was either much larger than average or who was carrying something heavy.

The researchers noted that the adults all appeared to be walking directly down the beach, while the children did as youngsters do, darting about haphazardly. They did not find any evidence that might explain why such a large group of Neanderthals was walking along a beach, but suggest they might have been hunting or fishing.