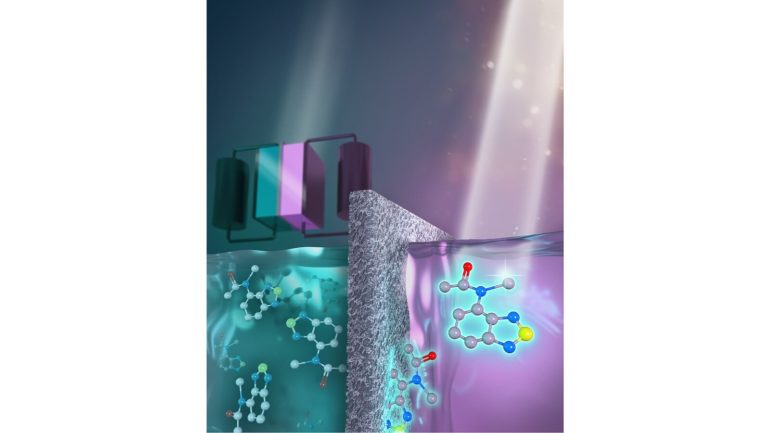 Monitoring the health of flow batteries in real time is a challenge. Argonne researchers have designed a fluorescent molecule for the purpose.

Research is charging ahead on redox flow batteries, a potential solution for storing energy on the electric grid. But such batteries remain a bit of a black box when it comes to diagnosing performance. At the U.S. Department of Energy’s (DOE) Argonne National Laboratory, scientists have hit upon fluorescence as a way to shed light on what’s happening with flow batteries as they operate.

Redox flow batteries work by storing energy in two separate tanks of fluid, which are similar to the positive and negative terminals of an AA battery. But flow batteries are intended for much bigger scales than what you could hold in your hand. A flow battery’s capacity, or storable energy, can be dialed up simply with larger tanks. This flexibility makes them appealing for use on the grid, where they can store fluctuating output from wind turbines and solar panels.

The battery fluids also contain supporting electrolytes, which are salt solutions that conduct electricity between the battery’s positive and negative terminals. The salts move across a membrane between the tanks to balance the charge or discharge of the redoxmers.

Developing and deploying these batteries will require the ability to monitor their performance in real time and in ways that go far beyond the little ‘battery state’ icons we’re used to seeing on our phones and computers. In a study funded by the Joint Center for Energy Storage Research (JCESR), a DOE Energy Innovation Hub led by Argonne, researchers set out to design carbon-based redoxmer molecules that could both carry energy within the battery and also signal a problem called crossover, when the redoxmers migrate to the wrong side of the battery.

“Crossover is a major issue for flow batteries,” said Lu Zhang, a chemist at Argonne. “In this case, it’s particularly challenging, because we’re dealing with very small molecules dissolved in an electrolyte and with membranes that are porous.”

In an ideal world, redoxmers stay in their respective compartments. But when crossover occurs and the redoxmers penetrate the membrane between the two tanks, it can degrade the battery’s performance.

The research team came up with two chemical variations of a common anode (negative)-side redoxmer, 2,1,3-benzothiadiazole (BzNSN). BzNSN is very stable during charging, is easily dissolved in a solvent-based electrolyte and can be engineered to fluoresce under ultraviolet light. These properties make it an excellent candidate for a self-reporting agent on the health within some types of flow batteries.

To measure the fluorescence of the molecules in common flow battery fluids, the researchers relied on fluorimetry measurements at the Center for Nanoscale Materials, a DOE Office of Science User Facility, which showed different behavior depending on the electrolyte salts used. Electrochemical stability measurements also highlighted that one molecular design in particular maintained its electrochemical function and stability over days when in its charged state. In a separate experiment, the telltale fluorescent glow under ultraviolet light was used to detect crossover of the redoxmer in real time, which reveals how the redoxmer molecule movements change depending on the electrolyte composition.

The study marks the first time that fluorescence has been used to monitor a state-of-health property in a flow battery design. “The fluorescence detection offers a great advantage over other methods because it’s highly sensitive,” said Lily Robertson, a postdoctoral appointee at Argonne. “We see the molecule the minute it crosses over.” Other detection methods such as cyclic voltammetry or absorbance spectroscopy, which measure current or absorbance of light, may interfere with a running battery or have sensitivity limits. The fluorescence also offers a unique visual handle that reveals nuanced interactions with the other components of the battery fluid, such as the supporting electrolyte.

Demonstrating the ability to use fluorescence as a beacon for crossover problems in a flow battery paves the way for similar self-reporting capabilities across other state-of-health metrics.

“We envision that we could apply this to most battery cycling parameters, such as capacity decay,” Zhang said.

The paper, “Fluorescence-Enabled Self-Reporting for Redox Flow Batteries,” was published in the journal ACS Energy Letters in August.