A mind-controlled exoskeleton helped a man with paralysis walk again 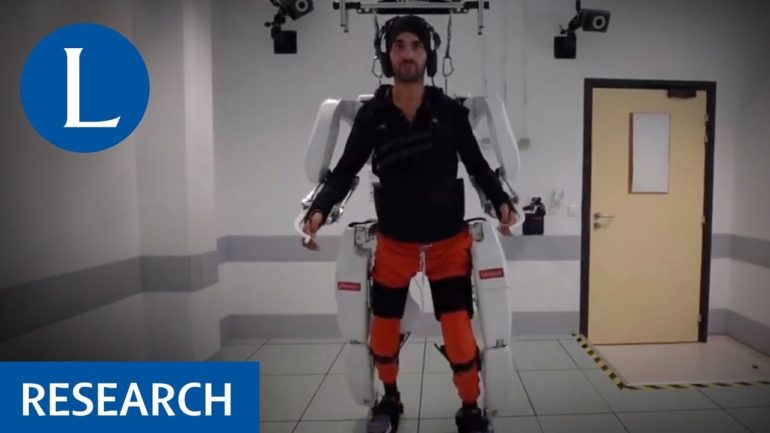 A man who has paralysis has managed to walk again using an exoskeleton he controls with his mind. The suit is directed by electrodes that rest on the brain’s surface, but it can’t yet allow independent walking

A paralysed man has been able to walk again using an exoskeleton suit he controls with his mind. Although it doesn’t yet let him walk independently – the suit is suspended from an overhead harness to stop him from falling – the advance represents the first steps down the road to this goal.

“This is really groundbreaking,” says Ravi Vaidyanathan of Imperial College London, who wasn’t involved in the work.

The implanted brain sensors also let the man, who broke his neck in a fall four years ago, move the arms and hands of the exoskeleton.

Several groups are working on ways to let people with spinal cord injuries regain control over their bodies by reading their thoughts. So far, the most common approach has been to insert ultrathin electrodes into the brain.

But this entails having wires entering the skull, which could let in an infection. The electrodes also gradually stop working so well over the following months as they get covered with cells that form a kind of scar tissue.

To get round these problems, Alim Louis Benabid at the University of Grenoble Alpes in France and his colleagues instead put electrodes on top of the brain, resting on its tough outer membrane. “If there’s any kind of infection, it will stay outside,” says Benabid.

The researchers started by asking the man, a former optician known as Thibault, to have several brain…