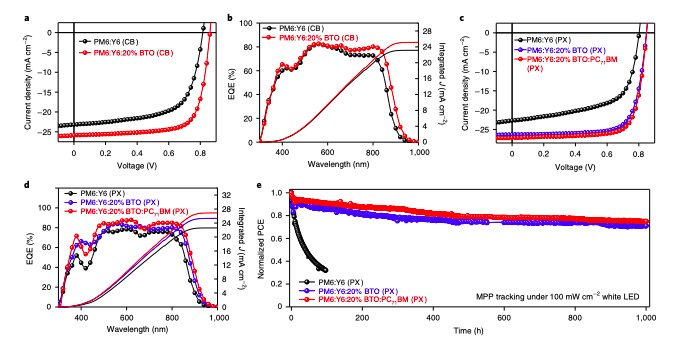 Over the past few years, engineers have created increasingly advanced technologies to produce and store energy more sustainably. Solar cells made of organic molecules or polymers are among the most promising sustainable energy solutions, as they are typically thin, lightweight and flexible.

To achieve these efficiencies, however, developers also need to use low-boiling-point and toxic solvents, such as chloroform. When these toxic solvents are substituted with environmentally friendly ones, the PCEs of organic solar cells tend to drop substantially.

Researchers at Soochow University in China, the Institute of Macromolecular Chemistry of the Czech Academy of Sciences, and other institutes worldwide have recently introduced a new strategy to create organic solar cells with acceptable PCEs using environmentally friendly solvents. This strategy, introduced in a paper published in Nature Energy, allowed them to create organic solar cells with efficiencies above 17 percent, without using solvents that are harmful for humans and the environment.

“We obtain certificated PCEs over 17 percent in organic solar cells processed from a green solvent paraxylene (PX) by a guest-assisted assembly strategy, where a third component (guest) is employed to manipulate the molecular interaction of the binary blend,” Haiyang Chen and his colleagues wrote in their paper. “In addition, the high-boiling green solvent PX enables us to deposit a uniform large-area module (36cm2) with a high efficiency of over 14 percent.”

In addition to being more efficient than many other organic solar cells created in the past, the devices created by Chen and his colleagues have a good operational stability, which is an essential quality for solar technologies to be applicable in real-world settings. This stability is further supported by the strong molecular interactions between host and guest molecules in the cells.

The researchers evaluated the effectiveness and generalizability of their guest-assisted solar cell-assembly strategy in a series of tests and experiments. Remarkably, they found that it generalized well and could also be implemented using other ‘guest’ components.

“The key features enabled by our strategy, including non-halogenated green solvent processability, uniform, large-area module, annealing-free production, high efficiency and excellent stability, are among the critical requirements for the industrial development of organic solar cells,” Chen and his colleagues wrote in their paper.