A superluminous supernova from a massive progenitor star 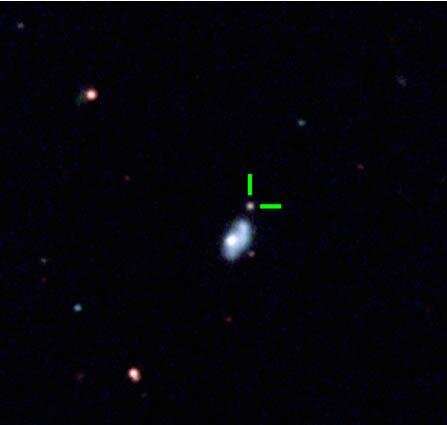 Stars greater than about eight solar-masses end their lives spectacularly as supernovae. These single-star supernovae are called core collapse supernovae because their dense cores, composed primarily of iron at this late stage of their lives, are no longer able to withstand the inward pressure of gravity and they collapse before exploding. Core collapse supernovae that display strong atomic hydrogen emission lines are thought to result from the explosions of red supergiant stars, massive stars that have evolved beyond their principle hydrogen burning stage and swelled in radius. Until recently, astronomers thought these stars were relatively quiescent until their final demise, but evidence has been accumulating that they actually experience strong mass loss before exploding. In some models, additional radiation is emitted when ejecta from the supernovae encounter these mass loss envelopes in shocks, and variations in this process are responsible for the observed differences in the emission from core collapse supernovae.

Over the last decade, a new subclass of supernovae has been identified, called superluminous supernovae (SLSNe). They can be as much as ten times as luminous as usual supernovae at their peak and fall roughly into two groups depending on whether they have strong or weak hydrogen emission. Some hydrogen-rich SLSNe show no signs of shocked emission from an envelope, however, adding to the complexity of the picture. Supernovae are key cosmological yardsticks because they are so bright and can be seen shining in the early epochs of the universe; the most distant supernova so far dates from an epoch only about three billion years after the big bang. The distances are reliably determined by comparing the measured and intrinsic luminosities, but only when the intrinsic luminosities are accurately modeled. Astronomers are therefore working to account for all the various classes and subclasses.

CfA astronomer Emilio Falco was a member of a team of astronomers who used the “All-Sky Automated Survey for Supernovae” (ASAS-SN) project, consisting of twenty-four telescopes world-wide, to automatically survey the visible sky for supernovae. The team, following up on one source ASASSN-18am (SN2018gk), concludes it is a rare, luminous, hydrogen-rich supernova but with no evidence of ejecta interacting with an envelope. The scientists conclude that the star must have had only a modest wind, only about two ten-thousandths of a solar-mass per year (some X-ray measurements suggest it could have been even smaller). The scientists estimate that the progenitor star probably had a mass of between nineteen and twenty-six solar-masses.

“ASASSN-18am/SN 2018gk: an overluminous Type IIb supernova from a massive progenitor” is published in MNRAS.

Nanomagnets can discern wine, and could slake AI’s thirst for energy