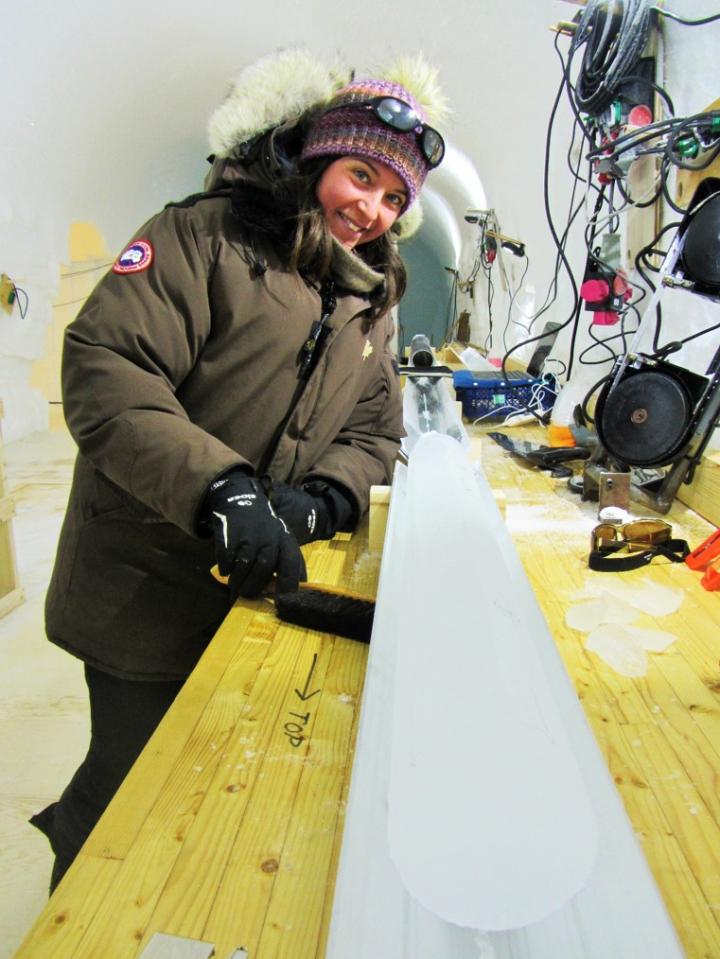 Throughout the last ice age, the climate changed repeatedly and rapidly during so-called Dansgaard-Oeschger events, where Greenland temperatures rose between 5 and 16 degrees Celsius in decades. When certain parts of the climate system changed, other parts of the climate system followed like a series of dominos toppling in succession. This is the conclusion from an analysis of ice-core data by a group of researchers that included postdoc Emilie Capron and associate professor Sune Olander Rasmussen from the Section for the Physics of Ice, Climate and Earth at the Niels Bohr Institute, University of Copenhagen, in Denmark.

This discovery, just published in the journal Nature Communications, is concerning because the extent of sea ice in the Arctic played an important part in these dramatic climate shifts of the past. Today, sea-ice extent is being rapidly reduced, and it is uncertain whether this part of the climate system can trigger sudden future climate change.

Understanding abrupt climate changes in the past is critical to our ability to confidently predict whether something similar will occur today or in the near future.

Over the last several decades, this has led climate scientists to search for causal relationships of abrupt climate change during the ice age when Greenland temperatures repeatedly rose by as much as 16 degrees Celsius in just decades before slowly falling back to normal ice-age levels.

“Many studies have tried to answer this long-standing question: Which part of the climate system changed first when these approximately 30 abrupt climate changes, called Dansgaard-Oeschger events, began? Was it, for example, the ocean currents in the North Atlantic, the wind and rainfall patterns in the Northern Hemisphere, or the spread of sea ice in the Arctic that triggered climate change?” says ice-core scientist Emilie Capron from the Niels Bohr Institute (University of Copenhagen) and the Institute of Environmental Geosciences (CNRS/Université Grenoble Alpes/IRD/Grenoble INP), who led the study now published in Nature Communications.

This new analysis reveals a surprisingly diverse set of dynamics within the Dansgaard-Oeschger events. The same physical processes changed together like a row of cascading dominoes, but surprisingly, neither the rate of change nor the order of the processes were the same from one event to the other.

In search of an explanation

The team of researchers used data from two parallel Greenland ice cores that spanned the last ice age to create an image of a typical Dansgaard-Oeschger event and to determine in what order the parts of the climate system changed at the onset of the abrupt climate transitions.

The goal is to be able to transfer this knowledge of the past to today’s climate and use the fingerprint of past climate change as a kind of warning signal for possible abrupt climate changes in the future.

The analysis, funded by the EU as a Marie Skłodowska-Curie Action and from a research grant from the Carlsberg Foundation, showed that changes in different parts of the climate system—ocean currents, sea-ice and wind patterns—were so closely intertwined that they likely triggered and reinforced each other, and led to these reoccurring abrupt climate changes.

Confirmed by a model

The results led the international team of scientists to compare the ice-core data with new results from climate model simulations of the last ice age developed by co-author Guido Vettoretti, postdoc at the Niels Bohr Institute. This IPCC-class of climate model is the same type as those used to make projections of future climate change. The comparison revealed that the model showed the same type of entangled behavior of sea ice, strength of ocean currents, and wind and precipitation patterns.

This is positive news in that it increases our confidence that these complex models demonstrably capture the physical processes needed to simulate these past abrupt climate changes. However, the result is also worrisome: One of the climate dominoes that could disrupt the entire system during the ice age was the extent of sea-ice cover in the North Atlantic, and the modern extent of sea ice has been declining at a significant rate since the 1980s, highlighting the risk of a similar domino effect due to man-made climate change.

Unfortunately, our understanding of the interplay between the many parts of the Earth’s climate system is insufficient to allow us to assess the risk of similar occurrences of abrupt climate change in the future.

Likewise, following the domino analogy: We do not know to what extent the initial conditions of the dominoes are different in today’s climate system compared to the situation during the last ice age.

“In any case, the results emphasize the importance of trying to limit climate change by, for example, cutting anthropogenic emissions of CO2 and other greenhouse gases, both to reduce the predictable, gradual climate change and to reduce the risk of future abrupt climate change,” says co-author Sune Olander Rasmussen, associate professor at the Niels Bohr Institute, and adds: “If you do not want the dominoes to topple over, you are better off not to push the table they stand on too much.”

The climate changed rapidly alongside sea ice decline in the north