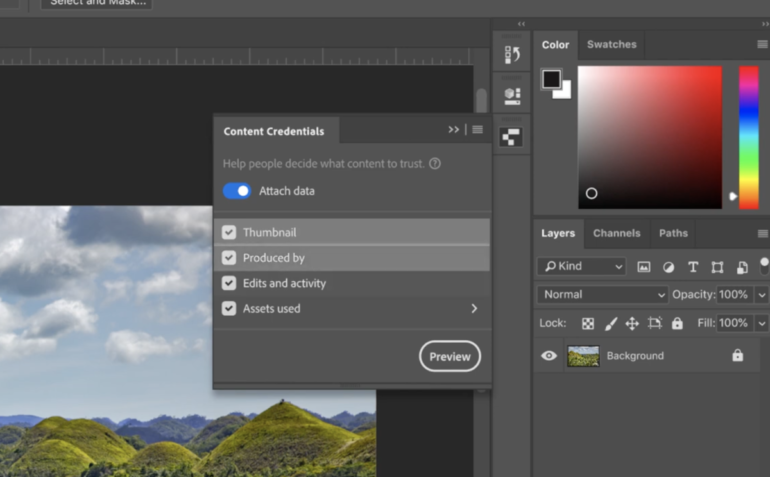 Adobe has begun testing a method to securely watermark digital assets such as photos in its applications to ensure proper attribution of digital media, it said in a blog post Tuesday afternoon.

The watermarking function is part of a broader industry effort to use authentication of authorship as a means to combat deep fakes and other misleading materials on the Internet.

Adobe’s Photoshop image editing tool, and its Behance marketplace for digital media, have gained a feature to add authorship data, via a palette of meta-data that can be turned on and off, according to an essay posted Tuesday by the Adobe executive in charge of the software Will Allen.

“The tool is built using an early version of the open standard that will provide a secure layer of tamper-evident attribution data to photos, including the author’s name, location and edit history,” wrote Allen.

In a YouTube video, a walk-through is shown of what’s called the Content Credentials panel, a palette that pops up in the Adobe UI just like brushes and other palettes.

The Credentials panel is working off of a proposed open standard for credentials that is being promoted by the Content Authenticity Initiative, a group formed a year ago by Adobe at its MAX user conference, in conjunction with The New York Times and Twitter. The CAI is promoting the adoption of meta-data across software platforms as a universal, secure means of enforcing authorship data.

A white paper posted by CAI describes various workflows. In the case of image data, a photojournalist would use a CAI-compliant device to capture the photo, and the device would automatically attach the authorship meta-data to the photo file, which would then be important to Photoshop and other CAI-compliant software tools.