African elephants only occupy a fraction of their potential range 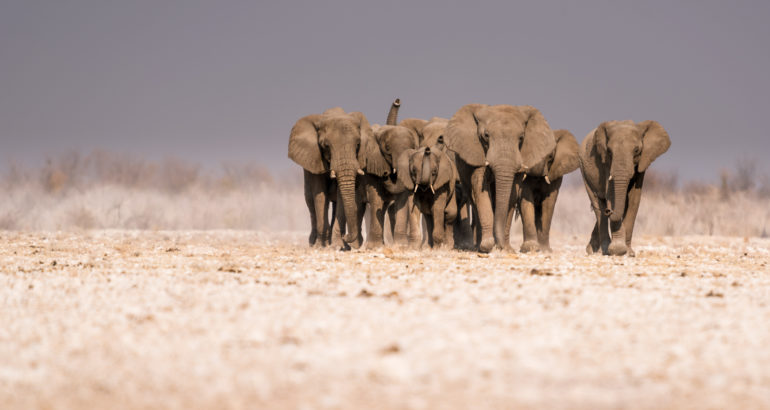 Many wildlife species are threatened by shrinking habitat. But according to new research, the potential range of African elephants could be more than five times larger than its current extent.

Due to 2,000 years of human pressure, African elephants have suffered dramatic population declines, and their range has shrunk to just 17% of what it could be, say researchers who led the new study, in Current Biology.

The dramatic reduction in range is due to the killing of elephants for their ivory and the encroachment of humans into elephant habitat. Evidence for elephants being drastically reduced in certain regions by the trade in tusks goes back to Ancient Roman times, but reached new levels from the 17th century onwards with the arrival of European traders and colonizers in Africa who fed the demand for ivory.

If released from the threat of being killed for their ivory, elephants still have great potential for recovery into areas where the human footprint is light. The study found that 62% of Africa, an area of over 18 million square kilometers—bigger than the whole of Russia—still has suitable habitat for elephants. This huge zone includes areas where there is still room for peaceful coexistence between humans and elephants, as well as those where they could potentially live but where conflict with people may make it unrealistic.

The team used data from GPS tracking collars and satellite imagery to undertake an in-depth investigation into where elephants roam, and why. By looking at the extremes of where modern-day elephants live, they learned where elephants had the potential to inhabit today.

“We literally looked at every square kilometer of the continent,” said the study’s lead author Dr. Jake Wall, the director of research and conservation at the Mara Elephant Project in Kenya. “We found 62% of those 29.2 million square kilometers is suitable habitat.”

To analyze the suitability of habitats over the entire continent at a kilometer-level scale, Wall and his colleagues drew on data from GPS tracking collars fitted to 229 elephants across Africa by Save the Elephants and its partners over a 15-year period. Using Google Earth Engine, a satellite-imagery computing platform, the researchers looked at the vegetation, tree cover, surface temperature, rainfall, water, slope, aggregate human influence, and protected areas in the areas the elephants traversed. This allowed them to determine which habitats can support elephants, and the extremes of conditions that they currently can tolerate.

In the future, the research team aims to further refine the model with regard to the density of human impact that is viable for coexistence between people and elephants, and to include the connectivity of habitat to other areas of elephant range.

The huge areas of potential habitat include the Central African Republic and the Democratic Republic of Congo, whose forests recently held hundreds of thousands of elephants but today hold only an estimated 5,000 to 10,000 animals.

The study also highlighted the extreme habitats that African elephants do not visit.

“The major no-go areas include the Sahara, Danakil, and Kalahari deserts, as well as urban centres and high mountaintops,” said Iain Douglas-Hamilton, the founder of Save the Elephants. “That gives us an idea of what the former range of elephants might have been. However, there’s a dearth of information about the status of African elephants between the end of Roman times and the arrival of the first European colonizers,” he explained.

Some evidence from antiquity has survived: Hanno, a Phoenician navigator, saw elephants on Africa’s Atlantic coast around 500 BCE, the ancient Greek historian Herodotus wrote in 430 BCE that elephants were reported in woodlands in present-day Tunisia, and a recently discovered 16th century Portuguese shipwreck contained tusks from at least 17 different herds of forest elephants with distinct genes. All but four of those distinctive gene types are now extinct. Coupled with historical data such as this, the new model suggests elephants once occupied most of the continent.

Adult elephants’ main predator in the wild are people. Elephants avoid humans by concentrating as far from human activity and influence as possible, which is usually in protected areas. “Elephants are quick to recognize danger, and find safer areas,” said Douglas-Hamilton. The tracking data reveals that elephants living in protected areas tend to have smaller home ranges.

The study notes that approximately 57% percent of current elephant range is outside of protected areas, highlighting the limited space presently reserved for their safety. To secure long-term survival of elephants, habitat protection, protection of elephants themselves from illegal killing and an ethic of human-elephant coexistence will be essential.

“Elephants are generalist mega-herbivores that can occupy fringe habitats,” Wall concludes. “Their range may have shrunk, but if we gave them the chance they could spread back to parts of their former habitat.”


Citation:
African elephants only occupy a fraction of their potential range (2021, April 1)
retrieved 1 April 2021
from https://phys.org/news/2021-04-african-elephants-occupy-fraction-potential.html