Ammonia synthesis by mechanocatalysis in a ball mill 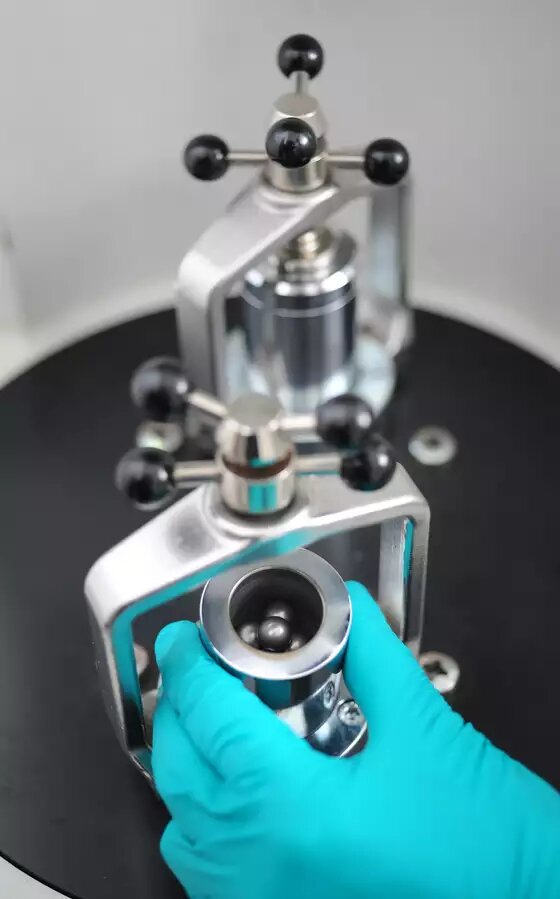 A breakthrough in the fight against hunger, three Nobel Prizes, and 150 million tonnes of annual production—yet still a tricky topic for research: For over 100 years, the chemical industry has been using the Haber-Bosch process to convert atmospheric nitrogen and hydrogen into ammonia, an important component of mineral fertilizers and many other chemical products. Scientists at the Max-Planck-Institut für Kohlenforschung have now found a surprisingly simple way to produce ammonia at ambient temperature—and even at atmospheric pressure—and thus under much milder conditions than those required for the Haber-Bosch process. The reactants are passed through a mill that grinds the catalyst used to facilitate the reaction between the inert nitrogen and hydrogen. The result is a thin but continuous stream of ammonia.

Five hundred degrees Celsius and 200 bar—these are the conditions usually required to get nitrogen to combine with hydrogen to generate ammonia. Only in this form can the nitrogen be used by plants. Despite all the controversy surrounding mineral fertilizers, the Haber-Bosch process is making an essential contribution to feeding the growing world population. It is thus no wonder that Fritz Haber and Carl Bosch as well as Max Planck researcher Gerhard Ertl, who elucidated exactly what happens in the process, were awarded the Nobel Prize in Chemistry. Nevertheless, chemists are still fixated on the synthesis of ammonia. “This has been a dream reaction for 100 years”, says Ferdi Schüth, Director at the Max-Planck-Institut für Kohlenforschung in Mülheim an der Ruhr. This expresses both how economically important the transformation is and how difficult it is to achieve. Because ammonia is considered a potential storage medium for hydrogen produced with renewable energy, it could become even more important.

Chemists would like to dispense with the harsh reaction conditions—also because of the amount of energy required. Considerable efforts have been made to find an alternative method of production: other catalysts, light as an energy source, electrolysis, and even mechanocatalysis—processes that take place in a ball mill. But these methods have yielded only minute amounts of ammonia (if any at all).

A higher yield than other alternatives to the Haber-Bosch process

When he planned his experiments in the mill, which rolls solids with steel balls, Steffen Reichle did not expect large quantities. “At the beginning, I was concerned mainly with how to detect very small amounts of ammonia”, says the chemist, who is doing his Ph.D. at the Max-Planck-Institut für Kohlenforschung. At atmospheric pressure, the gas formed only with a volume fraction of around 0.1%. At 20 bar, however, it was produced at 0.26 percent by volume and under further optimized conditions, at 0.4 percent. That is enough to be able to detect the product with conventional measuring methods and certainly more than previous approaches to finding an alternative route to the Haber-Bosch process have produced. “And with technical optimisations, we can probably increase the yield even more”, says Reichle. He also designed the process in such a way that the feedstock can be continuously passed through the ball mill and the ammonia flows steadily out of the reaction vessel. The chemical industry prefers such processes because they are easier to handle than those in which the reactants must be combined in portions in a closed vessel and the reaction constantly interrupted in order to isolate the product.

Caesium as a kind of chemical pixie dust

The chemists achieved the relatively high yield in ammonia synthesis in the ball mill by first searching for the optimal catalyst. Specifically, they wanted to enhance the effects of iron, an essential component of the conventional Haber-Bosch catalyst. They did so by mixing the alkali metal caesium with the iron powder. Combined with the mechanical forces of the grinding balls, the additive activated the catalyst to such an extent that the inert nitrogen combined with the hydrogen even under relatively mild conditions.

The researchers have several possible explanations for the stimulating effect of caesium. However, it is still unknown why the simple grinding process boosts the reaction. They now want to get to the bottom of that. “If we gain a better understanding of what exactly happens in the process, we may be able to find a way to further increase the yield of ammonia”, says Schüth. The ball mill could then also become the means of choice for ammonia synthesis”.

The new alchemy in carbon neutrality: Turning water into ammonia with only renewable energy