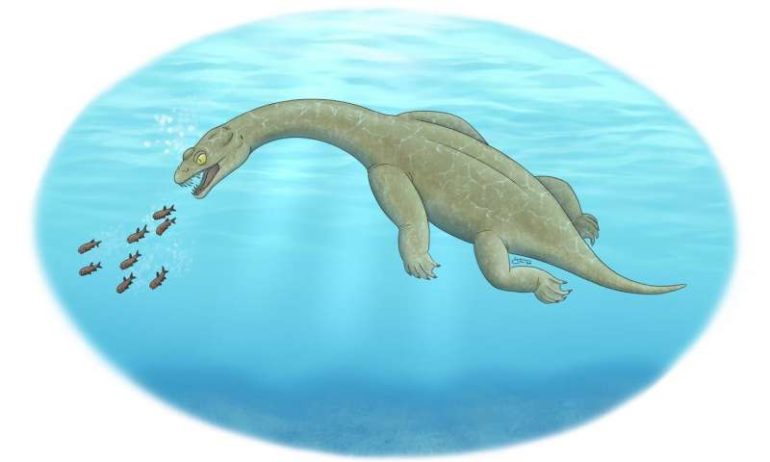 About 240 million years ago, when reptiles ruled the ocean, a small lizard-like predator floated near the bottom of the edges in shallow water, picking off prey with fang-like teeth. A short and flat tail, used for balance, helps identify it as a new species, according to research published in the Journal of Vertebrate Paleontology.

Paleontologists at the Chinese Academy of Scientists and Canadian Museum of Nature have analysed two skeletons from a thin layer of limestone in two quarries in southwest China. They identified the skeletons as nothosaurs, Triassic marine reptiles with a small head, fangs, flipper-like limbs, a long neck, and normally an even longer tail, probably used for propulsion. However, in the new species, the tail is short and flat.

“Our analysis of two well-preserved skeletons reveals a reptile with a broad, pachyostotic body (denser boned) and a very short, flattened tail. A long tail can be used to flick through the water, generating thrust, but the new species we’ve identified was probably better suited to hanging out near the bottom in shallow sea, using its short, flattened tail for balance, like an underwater float, allowing it to preserve energy while searching for prey,” says Dr. Qing-Hua Shang from the Chinese Academy of Sciences, in Beijing.

The scientists have named the new species Brevicaudosaurus jiyangshanensis, from the Latin ‘brevi’ for ‘short,’ ‘caudo’ for ‘tail,’ and the Greek ‘sauros’ for ‘lizard.’ The most complete skeleton of the two was found in Jiyangshan quarry, giving the specimen its species name. It’s just under 60cm long.

The skeleton gives further clues to its lifestyle. The forelimbs are more strongly developed than the hind limbs, suggesting they played a role in helping the reptile to swim. However, the bones in the front feet are short compared to other species, limiting the power with which it could pull through the water. Most of its bones, including the vertebrae and ribs, are thick and dense, further contributing to the stocky, stout appearance of the reptile, and limiting its ability to swim quickly but increasing stability underwater.

However, thick, high-mass bones act as ballast. What the reptile lost in speed, it gained in stability. Dense bones, known as pachyostosis, may have made it neutrally buoyant in shallow water. Together with the flat tail, this would have helped the predator to float motionless underwater, requiring little energy to stay horizontal. Neutral buoyancy should also have enabled it to walk on the seabed searching for slow-moving prey.

Highly dense ribs may also suggest the reptile had large lungs. As suggested by the lack of firm support of the body weight, nothosaurs were oceanic nut they needed to come to the water surface for oxygen. They have nostrils on the snout through which they breathed. Large lungs would have increased the time the species could spend under water.

The new species features a bar-shaped bone in the middle ear called the stapes, used for sound transmission. The stapes was generally lost in other nothosaurs or marine reptiles during preservation. Scientists had predicted that if a stapes was found in a nothosaur, it would be thin and slender like in other species of this branch of the reptilian family tree. However, in B. jiyangshanensis it is thick and elongate, suggesting it had good hearing underwater.

“Perhaps this small, slow-swimming marine reptile had to be vigilante for large predators as it floated in the shallows, as well as being a predator itself,” says co-author Dr. Xiao-Chun Wu from the Canadian Museum of Nature.

Massive, well-preserved reptile found in the belly of a prehistoric marine carnivore