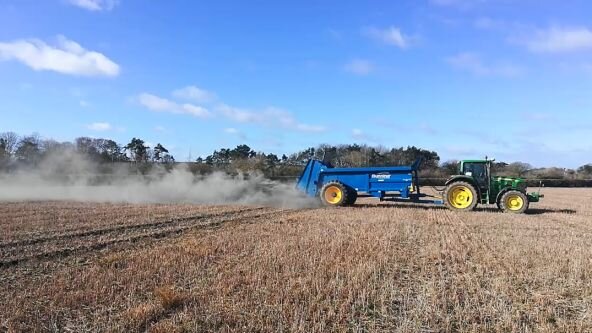 Adding crushed rock dust to farmland could draw down up to two billion tons of carbon dioxide (CO2) from the air per year and help meet key global climate targets, according to a major new study led by the University of Sheffield.

The technique, known as enhanced rock weathering, involves spreading finely crushed basalt, a natural volcanic rock, on fields to boost the soil’s ability to extract CO2 from the air.

In the first nation-by-nation assessment, published in Nature, scientists have demonstrated the method’s potential for carbon drawdown by major economies, and identified the costs and engineering challenges of scaling up the approach to help meet ambitious global CO2 removal targets. The research was led by experts at the University of Sheffield’s Leverhulme Centre for Climate Change Mitigation, and the University’s Energy Institute.

Meeting the Paris Agreement’s goal of limiting global heating to below 2C above pre-industrial levels requires drastic cuts in emissions, as well as the active removal of between two and 10 billion tons of CO2 from the atmosphere each year to achieve net-zero emissions by 2050. This new research provides a detailed initial assessment of enhanced rock weathering, a large-scale CO2 removal strategy that could make a major contribution to this effort.

The authors’ detailed analysis captures some of the uncertainties in enhanced weathering CO2 drawdown calculations and, at the same time, identifies the additional areas of uncertainty that future work needs to address specifically through large-scale field…