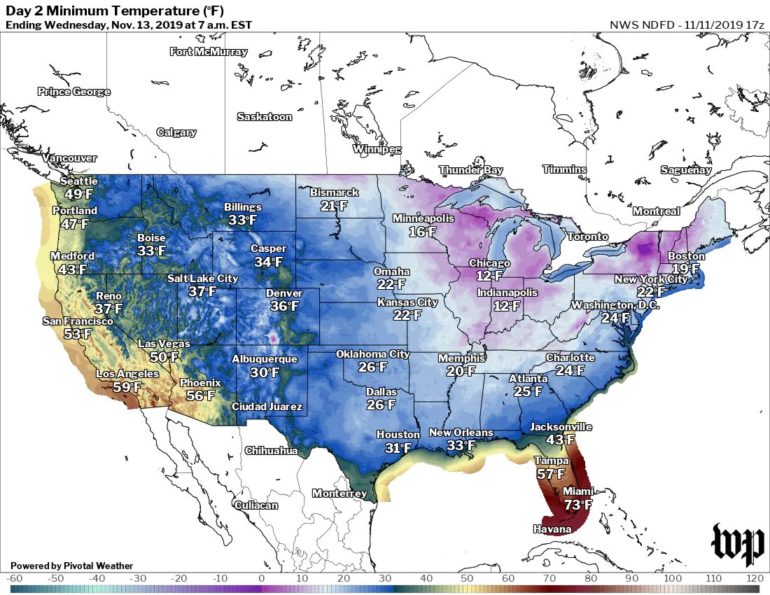 A surge of frigid air is barreling across the eastern half of the nation, unleashing snow and, in many locations, the coldest weather on record for this time of year.

A surge of frigid air is barreling across the eastern half of the nation, unleashing snow and, in many locations, the coldest weather on record for this time of year.

The National Weather Service is calling it "the coldest surge of arctic air so far this season," predicting 385 cold records to fall from the Plains to the East Coast through Wednesday.

In many locations, temperatures have bottomed out or will drop to 15 to 30 degrees Fahrenheit below average. For tens of millions, the cold will barge in suddenly, with temperatures plummeting 30 degrees F in 12 hours or less.

In Dallas, the temperature crashed 19 degrees F in a single hour Monday as the Arctic front moved through, from 65 to 46 F (18 to 7 degrees Celsius) between 10 am and 11 am local time, as winds gusted to 44 mph (70 km/h). Lows are predicted to drop into the 20s there on Monday night.

The cold first invaded the northern Rockies on Sunday. In Havre, Mont., the mercury tanked to a record low of -18 F (-27 C) on Sunday. Then, on Monday, temperatures in northern Montana fell as low as -30 F (-34 C).

The cold is rapidly expanding southeast and will even reach the zone from Galveston, Texas, to the Florida Panhandle along the Gulf Coast. By Wednesday morning, almost the entirety of the eastern half of the Lower 48 will see freezing temperatures, except for the Florida Peninsula.

As the Arctic front plows eastward, it is producing a wide swath of accumulating snow on its backside…