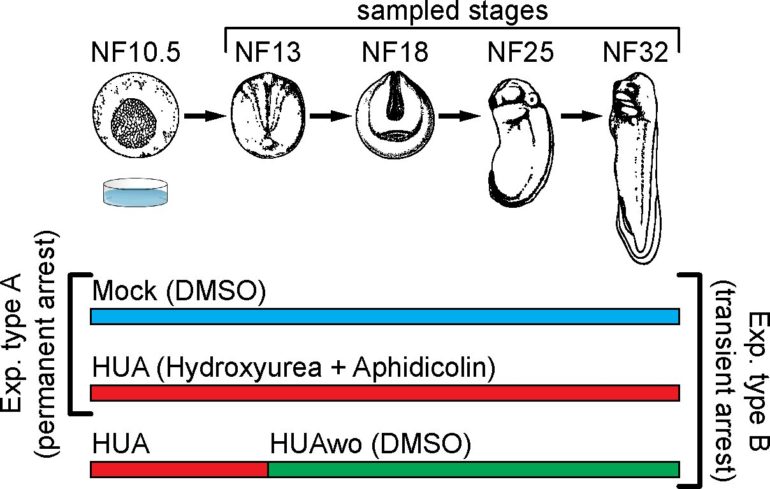 DNA, the hereditary material, interacts with proteins in the nuclei of cells to form a tightly packed complex with proteins, which is referred to as “chromatin.” The molecular architecture of the chromatin regulates access to genes, and therefore determines which genes can be activated in different cell types. Various chemical modifications of proteins called histones—which play a decisive role in the structuring of chromatin—serve as markers that can either activate or inhibit gene expression. How these epigenetic modifications are regulated during development, and in other contexts, is incompletely understood. Now researchers led by LMU molecular biologist Ralph Rupp have shown that the process of cell division itself can have an impact on which modifications become dominant. In rapidly dividing cells, levels of inhibitory modifications are reduced, increasing the probability of silenced genes to be reactivated. This phenomenon occurs in embryonic cells, and very probably in adult stem cells and precursor cells, as Rupp and his colleagues report in the journal PLOS Biology.

Histone modifications encode important information that helps to ensure the orderly progression of early development. Using an established experimental model—the tadpole stage of the clawed toad Xenopus laevis—Rupp’s group was able to show that different histone modifications become dominant in different stages of embryonic development. “To our great surprise, we found that the cell cycle—the sequence of events that takes place in cells in the interval between one division and the next—has an impact on the profile of modifications present in the chromatin,” says Rupp. “When cells switch between a quiescent, resting state and a proliferative state—in which cells divide more often—certain epigenetic markers are selectively altered.”

This is true in particular for repressive modifications, which silence genes. “Such modifications are apparently very sensitive to what is known as the S-phase dilution effect,” says Rupp. This effect results from the fact that during cell division, not just the DNA, but the chromatin as a whole must be replicated. While the existing histone proteins are equally distributed between the replicated DNA strands, newly synthesized histones—which have not yet been modified—fill in the gaps. So in effect, the degree of histone modification of the daughter chromosomes immediately after cell division is only half as big as it was prior to DNA replication.

The observations made on the clawed toad demonstrate that the rate of cell proliferation outperforms the rate, at which repressive histone modifications are synthesized in chromatin. One important implication of this is that genes that have already been inactivated, return to a less repressed state once a cell decides to divide again. This in turn suggests that the properties of any given cell are more malleable than is generally assumed. “In contrast, in resting cells the total number of repressive markers increases—and at some stage it reaches a level at which specific genes become permanently inactivated,” says Rupp.

In addition to embryonic cells, this mechanism most probably plays an important role in adult stem cells and precursor cells, according to the study’s authors. They also suggest that it could possibly be used as a means of reprogramming cells to make them more efficient for specific therapeutic purposes.