Astronomers detect most energetic outflow from a distant quasar 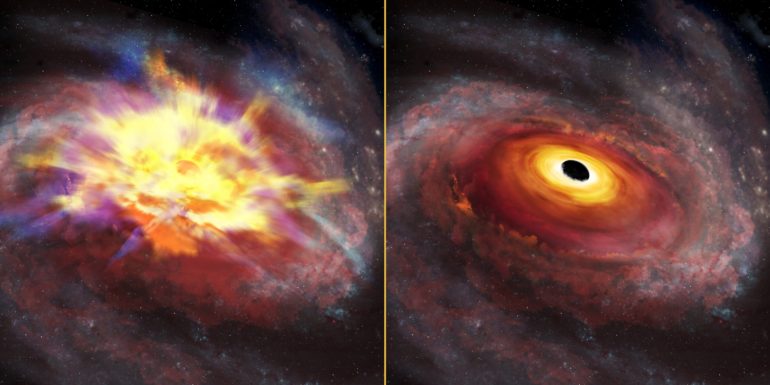 Researchers using the Gemini North telescope on Hawai’i’s Maunakea have detected the most energetic wind from any quasar ever measured. This outflow, which is travelling at nearly 13% of the speed of light, carries enough energy to dramatically impact star formation across an entire galaxy. The extragalactic tempest lay hidden in plain sight for 15 years before being unveiled by innovative computer modeling and new data from the international Gemini Observatory.

The most energetic wind from a quasar has been revealed by a team of astronomers using observations from the international Gemini Observatory, a program of NSF’s NOIRLab. This powerful outflow is moving into its host galaxy at almost 13% of the speed of light, and stems from a quasar known as SDSS J135246.37+423923.5 which lies roughly 60 billion light-years from Earth.

“While high-velocity winds have previously been observed in quasars, these have been thin and wispy, carrying only a relatively small amount of mass,” explains Sarah Gallagher, an astronomer at Western University (Canada) who led the Gemini observations. “The outflow from this quasar, in comparison, sweeps along a tremendous amount of mass at incredible speeds. This wind is crazy powerful, and we don’t know how the quasar can launch something so substantial”.

How our genes influence our gut health

As well as measuring the outflow from SDSS J135246.37+423923.5, the team was also able to infer the mass of the supermassive black hole powering the quasar. This monstrous object is 8.6 billion times as massive as the Sun -about 2000 times the mass of the black hole in the center of our Milky Way and 50%…