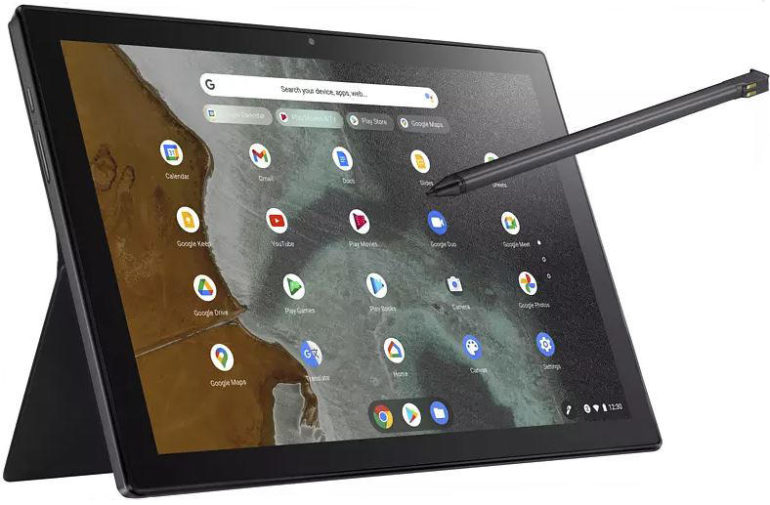 Tablets designed to run the Chrome operating systems have had a rocky road, especially compared to the runaway success of Chromebook laptops. Like Chromebox desktops, Chromebook tablets are few and far between, with occasional big splashes only to fade away as they fail to connect with the market.

One of those splashes came last year with Lenovo’s release of the Duet, a 10-inch tablet running Chrome and including a detachable keyboard for under $300. It’s been well received enough that it’s apparently spurred a competitor in the Asus Chromebook Flip CM3000, a similar system that the company didn’t announce along with its new Chromebook and Chromebox offerings at CES a couple of weeks ago. (That compares to two years ago, when Asus did unveil the Chromebook Tablet CT100 at CES.) However, some Internet sleuthing from the likes of Chrome Unboxed has unearthed its existence through listings on various online retailers, complete with leaked images and specs.

The CM3000 appears to share many features with the Duet, from bundled detachable keyboard to ARM-based processor to full HD touchscreen display. It does uses a a slightly different MediaTek processor than the Duet (MT8183 compared to Helio P60T), however, and comes with a slightly larger screen (10.5-inch versus 10.1-inch). It also seems to include a USI pen whereas the Duet has USI pen support but you have a purchase the digital stylus separately.

The inclusion of the pen may be part of why the CM3000 is being listed for a higher price at German e-tailer Saturn (449 euros), but not what translates to a difference of over $100. Of course, without an official statement from Asus, it’s hard to know if that’s going to be the final price point, much less whether it will even be available in North America. It may be difficult to compete with the higher profile Duet by charging more — not to mention that the market might not even be there for a second Chromebook tablet — but we’ll have a better idea when (and if) Asus provides official word on the CM3000’s existence.