Atoll Palmerston has only 63 inhabitants and all are descendants of a single man! 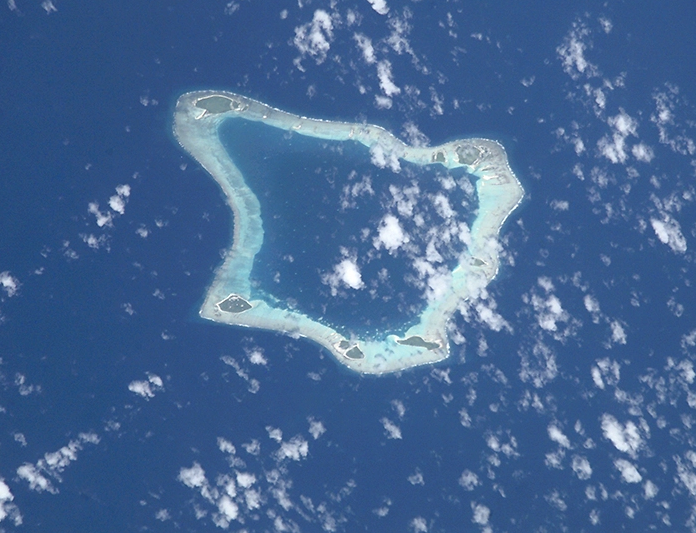 To access it, you will need nine days by boat in the Pacific Ocean. At the end of the trip, you will reach Palmerston, a small Cook Islands atoll with an area of ​​2 km2 where only 63 inhabitants live. These have the particularity ofto be the descendants of a single man, an Englishman who came to settle here 150 years ago.

If you dream of spending the rest of your life in a real place cut off from the rest of the world, Palmerston is for you. Indeed, there, no shop. To earn a living, locals fish and harvest the coconut. Leisure: jewelry creation, swimming or volleyball. Few people own a mobile phone. They have electricity and internet just hours a day and receive satellite TV. And, important detail, the city has only two toilets!

Located in an atoll of a dozen islets, Palmerston is only accessible by boat. No airport. This explains why people live so isolated from the rest of the world. Indeed, for example, a simple appointment at the dentist can take several months. If the trip only takes a few days, the return is much more complicated since it is very difficult to organize shuttles to the Cook Islands.

The Cook Islands were discovered by explorer James Cook who gave them his name. The British navigator treads the soil of this atoll on June 16, 1774 and will baptize Palmerston Island in honor of Lord Palmerston who was at the head of the British Admiralty. After his discovery, it will remain uninhabited nearly 80 years. 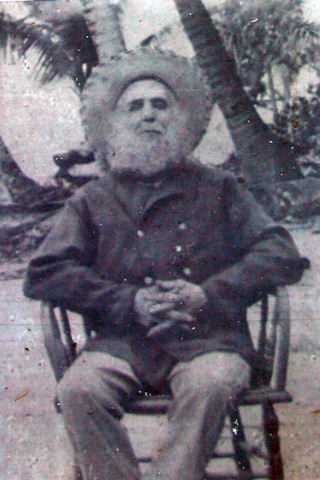 This is onlyin the mid-nineteenth century a British adventurer, William Marsters, falls on Palmerston and falls in love. This one belongs to John Brander, a Scottish planter based in Tahiti. It is there that Marsters meets the owner of Palmerston and he will be appointed guardian by Brander. He will have his authorization to grow coconut trees and it was in 1863 that William Marsters moved to Palmerston with his three wives.

After taking up residence on the island, William Marsters can count on the arrival of a boat twice a year to bring him supplies in exchange for coconut oil. But little by little, the visits of the boat are spaced out to finally not take place any more.

In a letter written by Marsters, dating from January 1888, the man explains that during the first six years, the boats came regularly and he had no visit for two or three years to finally stop in 1878. 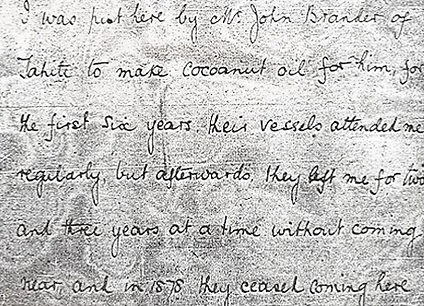 But it took more to discourage the young British adventurer who made his home at the end of the world. Worker, Marsters finds the way to survive. He built a timber-based farm recovered from wrecks. This one still exists. 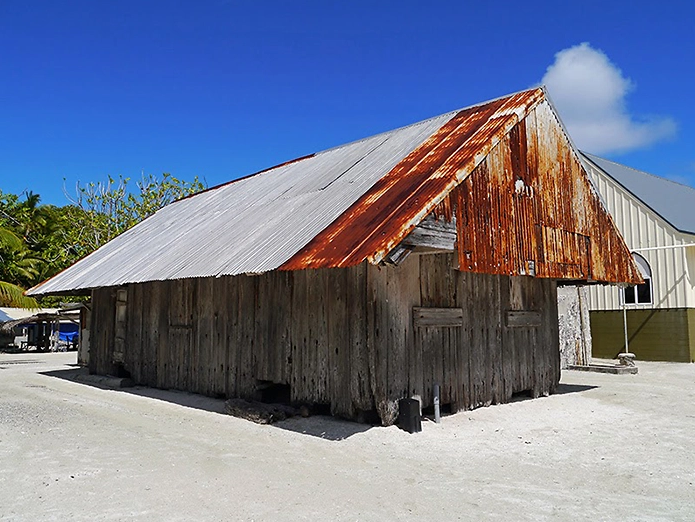 Upon the death of John Brander, the island's owner, Queen Victoria grants Marsters the right to own Palmerston. With his three wives, William Marsters will have 23 children and 134 grandchildren. Before his death in 1899, he divided the island into three parts, one part for each of his wives. On his death, the island is populated by 100 people. Over the years, the population will increase with 300 people enumerated between 1950 and 1970. With the exception of three people, all the inhabitants are direct descendants of Marsters. 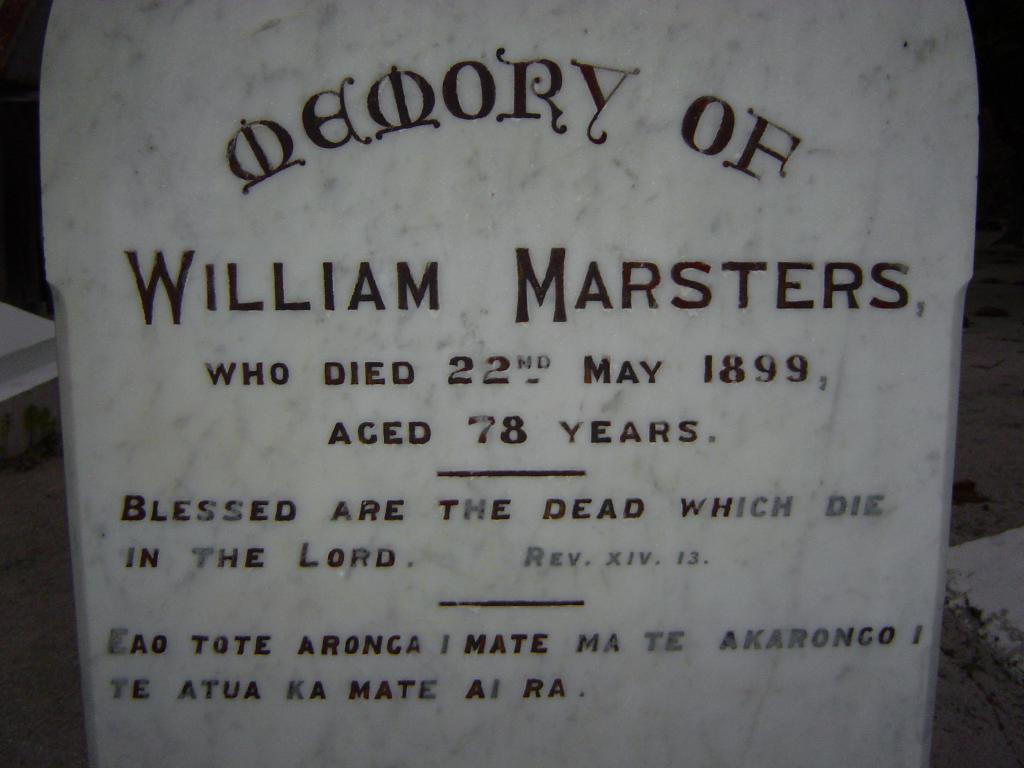 Since the 63 inhabitants of the atoll are all from the same family, the question of consanguinity is important. To limit it, marriages between the different descendants of the three wives of Marsters are forbidden. This is the reason why the island has seen its population decrease. As the Mayor explains, young people want to go to other horizons, meet and marry other people and give birth to healthy children.

Today, the island has many plots of land that can not be cultivated. The inhabitants are trying in every way to attract potential future residents to live in the atoll, but in vain, no volunteer has become so … Unless after reading this article the urge takes you to go there … 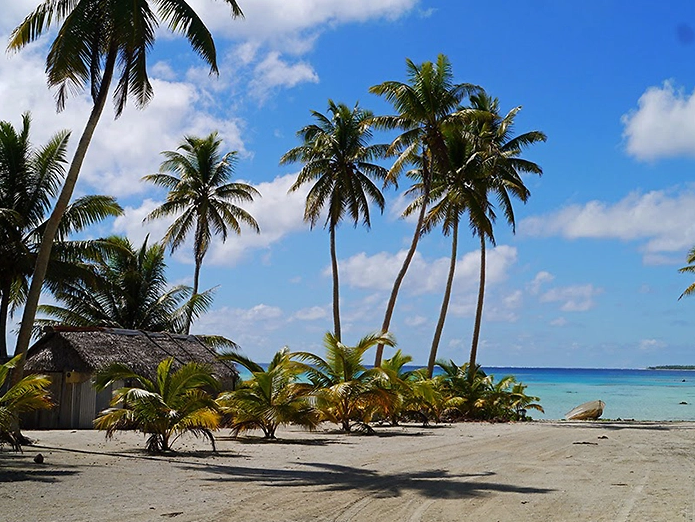 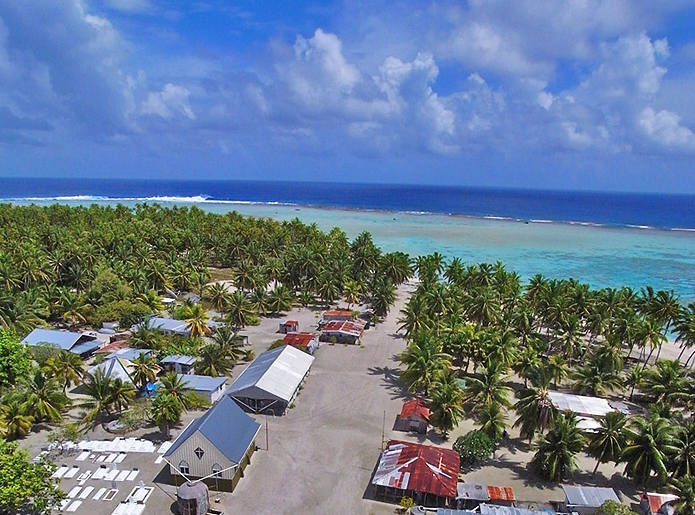