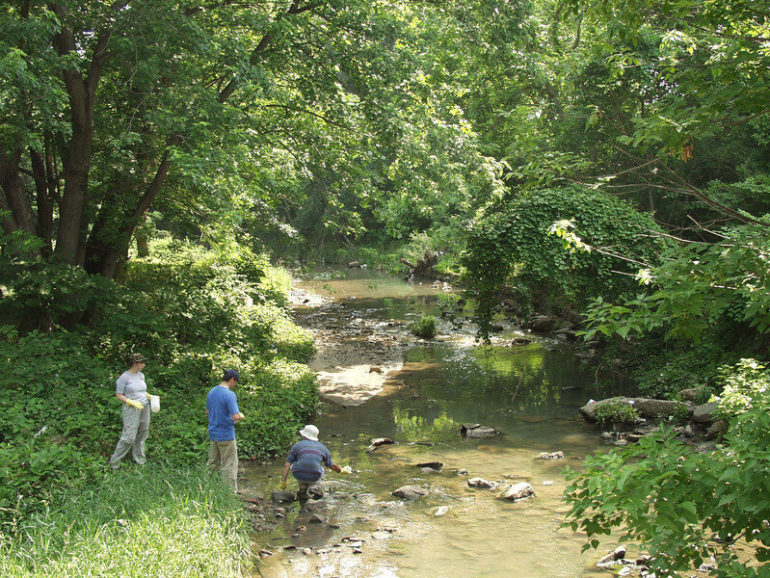 In Baltimore, Maryland, leaky sewage infrastructure delivers tens of thousands of human doses of pharmaceuticals to the Chesapeake Bay every year. So reports a new study in Environmental Science & Technology that monitored an urban stream network over a yearlong period. Drug concentrations detected were persistent, variable, and occurred at ecologically relevant levels.

Pharmaceutical pollution to freshwaters is a global problem that is poorly quantified. Mixtures of drugs in lakes, rivers, and streams can disrupt animal biology and behavior, algal growth, and other ecological processes—with harmful cascading effects.

Lead author Megan Fork, a postdoctoral research associate at Cary Institute of Ecosystem Studies, says, “Pharmaceuticals enter freshwaters through multiple pathways, including effluent from wastewater treatment and septic systems, as well as agricultural runoff. An important, but often overlooked contributor is aging and faulty wastewater infrastructure, which is common in many older cities.”

For a year, weekly water samples were collected from six sites in Baltimore’s Gwynns Falls watershed. Fork explains, “Because Gwynns Falls streams don’t receive wastewater effluent, we were able to estimate annual loads of pharmaceutical pollution attributed to leaky pipes alone.” Sites represented a gradient of development, ranging from suburban to highly urban. The team also sampled a forested reference site to the northwest of the Gwynns Falls watershed.

Samples were screened for 92 pharmaceutical compounds. Across the seven study sites, 37 unique compounds were detected. The most common was the antibiotic trimethoprim. The highest concentration of pharmaceuticals was detected where the Gwynns Falls meets Baltimore’s Inner Harbor. Here, the painkiller acetaminophen was most prevalent. Drug concentrations were higher at more densely populated sites.

To estimate the amount of pharmaceutical compounds that leaky pipes delivered to the watershed each year (the annual ‘load’), the team paired data on drug concentrations detected at the Gwynns Falls outlet with river discharge rates recorded by a USGS monitoring station at the site. Annual loads were calculated for nine pharmaceutical classes.

The results: leaky pipes in the Gwynns Falls watershed deliver the equivalent of tens of thousands of doses of pharmaceutical compounds to Baltimore’s Inner Harbor; this includes 30,000 adult doses of antidepressants, 1,700 doses of antibiotics, and about 30,000 tablets of acetaminophen. Concentrations were environmentally relevant—at levels that could affect organisms’ behavior, biology, and other ecological processes—and highly variable, meaning aquatic organisms are exposed to a constantly changing mixture of compounds.

Fork explains, “Establishing the loads of contaminants such as pharmaceuticals is important since low concentrations may mislead regulators and managers into thinking that they are insignificant. In Baltimore we are already seeing that stream-dwelling bacteria are resistant to common antibiotics, suggesting that low chronic exposures can result in significant effects on stream life.”

Next, the team calculated the annual watershed ‘mass balance’ for eight pharmaceutical classes. The goal: to reveal the pathways by which pharmaceutical compounds being consumed in the Gwynns Falls watershed enter the environment, and how these pathways differ among compounds.

Emma Rosi, senior co-author and aquatic ecologist at Cary Institute, explains, “Our findings show that plants and animals exposed to sewage from leaky pipes are receiving a different mix of compounds than those exposed to wastewater treatment plant effluent. In the Gwynns Falls watershed, wastewater effluent is the main delivery pathway for antibiotics, while painkillers are more likely to enter the environment via leaking infrastructure. This sort of information is critical to assessing organisms’ exposure to different compounds and associated effects.”

Rosi notes, “We estimate that nearly 1% of raw sewage originating in the Gwynns Falls watershed flows into the environment via leaking infrastructure. If we extrapolate our calculations to the entire Chesapeake Bay watershed, we estimate that approximately 11.7 billion liters of raw sewage may enter the Bay via leaks every year—carrying a range of pharmaceutical compounds that can affect aquatic organisms and disrupt ecosystem processes.”

With Fork concluding, “Our findings underscore the ubiquity of drugs in freshwaters, and the need to examine and account for all pollution pathways, not just obvious ones like wastewater treatment plant effluent.”

This research is a contribution to the Baltimore Ecosystem Study, a Long Term Ecological Research site funded by the US National Science Foundation. For over 20 years, the Gwynns Falls study sites have been monitored for water pollution; this data adds to a growing body of research looking at emerging environmental contaminants.