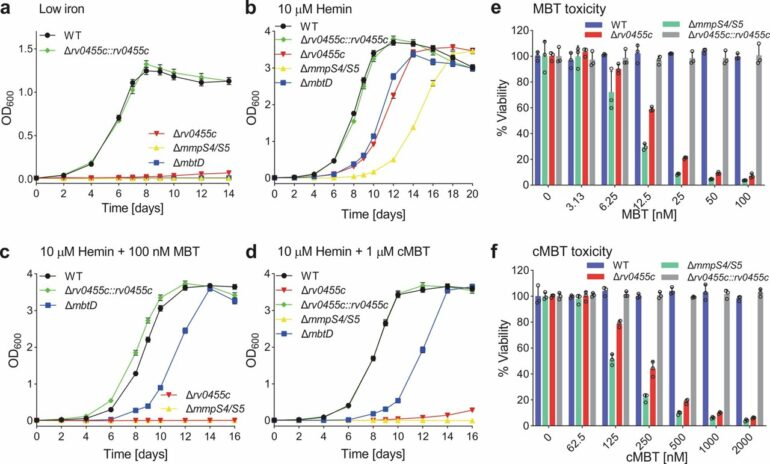 Lei Zhang, Ph.D., and Michael Niederweis, Ph.D., of the University of Alabama at Birmingham have made what they call “a major step” in understanding how Mycobacterium tuberculosis acquires iron from its human host—a process essential for the pathogenesis of this bacterium. Tuberculosis kills more than 1 million people each year, but without iron, M. tuberculosis cannot grow.

In general, bacteria acquire iron in a well-understood manner. They produce molecules called siderophores, which is Greek for “iron carrier,” and they use molecular pumps to excrete the siderophores out through the inner and outer membranes. The siderophores have the ability to bind iron very tightly. Then these iron-clutching siderophores are transported back into the bacteria. Inside, the iron is released for use in essential enzymes.

However, the Mycobacteriaceae family—which includes the microbial pathogens for tuberculosis and leprosy—differ greatly from bacteria like E. coli, where the machinery involved in siderophore transport has been heavily studied.

Over the past decade, researchers in the Niederweis lab at UAB have advanced siderophore knowledge for M. tuberculosis, or Mtb. In 2013, they described two small membrane proteins that are required for siderophore secretion by Mtb, through their association with known efflux pumps to comprise a siderophore export system at the inner membrane.

In 2014, they described how a double mutant of those two small proteins left the Mtb exquisitely sensitive to tiny concentrations of the Mtb siderophore mycobactin, a toxicity phenomenon they named siderophore poisoning.

In 2020, they described how mutation of another Mtb gene, rv0455c, showed the same phenotype as deletion of the two small proteins—siderophore poisoning in the presence of mycobactin. Furthermore, the rv0455c gene is located close to the gene location for the two small proteins that are essential for siderophore efflux. Therefore, the UAB researchers hypothesized that rv0455c also would function in siderophore secretion.

That was correct, as they report in the Nature Communications study, “A periplasmic cinched protein is required for siderophore secretion and virulence of Mycobacterium tuberculosis.”

Using a variety of genetic and biochemical approaches, they showed that the rv0455c gene is essential for Mtb to grow in low-iron medium, and that the secretion of the two Mtb siderophores—mycobactin and carboxymycobactin—is drastically reduced in the rv0455c deletion mutant.

Although quantities of the Rv0455c protein are found outside of growing Mtb cells, Zhang and Niederweis found that a genetically engineered Rv0455c variant—designed to anchor in the Mtb inner membrane—was functional in siderophore secretion, supporting an intracellular role for Rv0455c. Deletion of Rv0455c from a virulent strain of Mtb severely impaired replication of M. tuberculosis in mice, demonstrating the importance of Rv0455c and siderophore secretion during disease.

The rv0455c gene in Mtb has no sequence homology with genes in bacteria like E. coli, but it is one of the core genes found in Mycobacteria, with a high degree of homology among the various homologs. Prior to the current study, Rv0455c had been annotated as a protein of unknown function.

The researchers found that genes homologous to rv0455c from M. smegmatis, M. leprae and M. haemophilium were fully functional in Mtb, restoring its growth in the presence of mycobactin. The crystal structure of the homologous protein from M. smegmatis showed a disulfide bond in the protein, producing a “cinched” structure, and the protein presents two surface patches of amino acids that are evolutionarily conserved among the Mycobacteria.

The mechanistic function of Rv0455c is still unknown, and the protein does not show the deep cleft commonly found in siderophore-binding proteins. However, Rv0455c may play an important structural role in the siderophore secretion system of Mtb, researchers say, possibly by acting as an essential accessory protein or by connecting the inner-membrane siderophore exporters with a putative outer membrane channel.

Provided by
University of Alabama at Birmingham


Citation:
A gene in tuberculosis bacteria is found essential for siderophore secretion and virulence (2022, May 12)