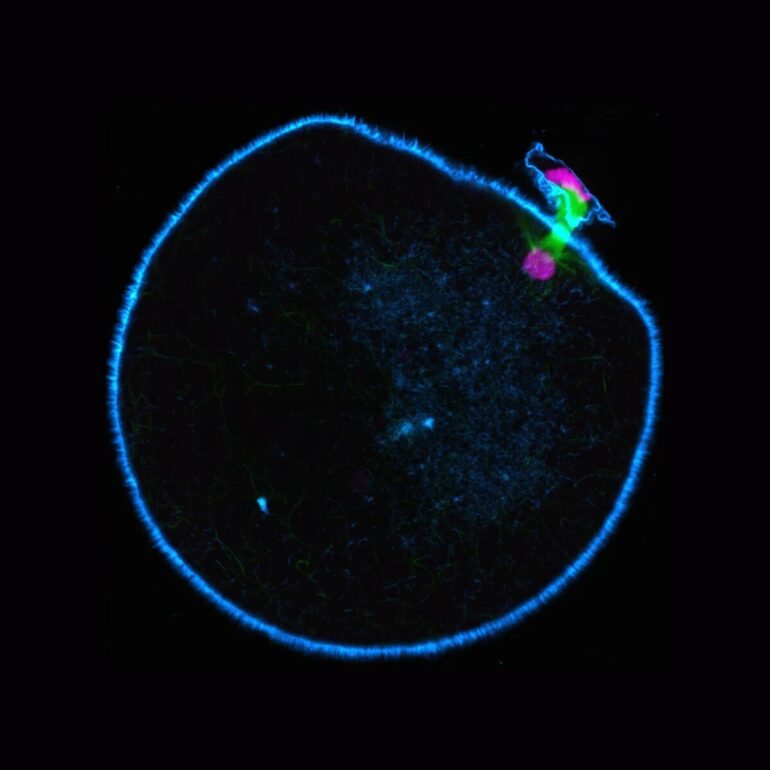 Human eggs often contain the wrong number of chromosomes, leading to miscarriages and infertility. A research team led by Melina Schuh at the Max Planck Institute (MPI) for Multidisciplinary Sciences has discovered that human eggs are missing an important protein, which acts as a molecular motor. This motor helps to stabilize the machinery that separates the chromosomes during cell division. The researchers’ findings open up new avenues for therapeutic approaches that could reduce chromosome segregation errors in human eggs.

A new life begins when an egg is fertilized by a sperm. In this fusion, the genetic information from each parent is combined. The sperm and egg both contribute a single copy of each of their 23 chromosomes. The newly developing embryo thus inherits a complete set of 46 chromosomes. However, the oocyte—the egg’s precursor cell—contains two copies of every chromosome and must therefore lose half of these before fertilization can take place. This happens in a specialized cell division called meiosis. A complex machinery—the spindle apparatus—ensures that a maturing oocyte retains the correct number of chromosomes. It consists of spindle fibers that attach to the chromosomes during meiosis. The fibers then pull one copy of each chromosome to opposite poles of the spindle, and the oocyte subsequently divides between them.

This process is highly error-prone in humans. If too many or too few chromosomes remain in the mature egg, there is a risk of miscarriage or diseases in the offspring such as Down syndrome. “We already know that human oocytes frequently assemble spindles with unstable poles. Such unstable spindles misarrange chromosomes during division,” says Melina Schuh, who heads the Department of Meiosis at the MPI for Multidisciplinary Sciences. These high error rates are much lower elsewhere in the animal kingdom. “The spindles of other mammalian oocytes were always stable in our experiments,” she reports.

Unstable spindles due to a missing motor protein

To find out what makes human spindles so unstable, the team compared the molecular inventory of proteins required for spindle stability, in different mammalian oocytes. For these experiments, the researchers used unfertilized human oocytes that were immature at the time of fertility treatment and donated by patients of the Bourn Hall Clinic (UK), Kinderwunschzentrum Göttingen (Germany) and Fertility Center Berlin (Germany) for research. For comparison with other mammalian species, they used oocytes from mice, pigs, and cattle.

The researchers discovered that human oocytes are deficient in the protein KIFC1. This motor protein forms bridges between spindle fibers, which help to align the fibers and prevent them from falling apart. “Compared to humans, oocytes from mice, pigs, and cattle contain significantly more KIFC1 protein,” explains Chun So, a postdoctoral fellow in Schuh’s department and the first author of the study. The scientists next investigated whether manipulation of the protein level affects spindle stability. They depleted KIFC1 protein in mouse and bovine oocytes using a new method co-developed in Schuh’s lab called Trim-Away. This technique rapidly degrades almost any target protein in any type of cell. “Without this motor protein, most mouse and bovine oocytes assembled unstable spindles like human oocytes and more chromosome segregation errors occurred. Thus, our results suggest that KIFC1 is critical in ensuring error-free distribution of chromosomes during meiosis,” the junior researcher adds.

A cornerstone for new therapeutic approaches

Could KIFC1 be a starting point for reducing chromosome separation errors in human eggs? “For us, the exciting question was: Do spindles become more stable if we introduce extra KIFC1 into human oocytes?” Schuh says. Indeed, under the microscope, oocytes supplemented with extra KIFC1 had significantly more stable spindles, resulting in fewer chromosome segregation errors. “Introducing KIFC1 into human oocytes could thus be a possible approach to reduce defective eggs. This might help to make fertility treatments more successful,” the Max Planck director says.