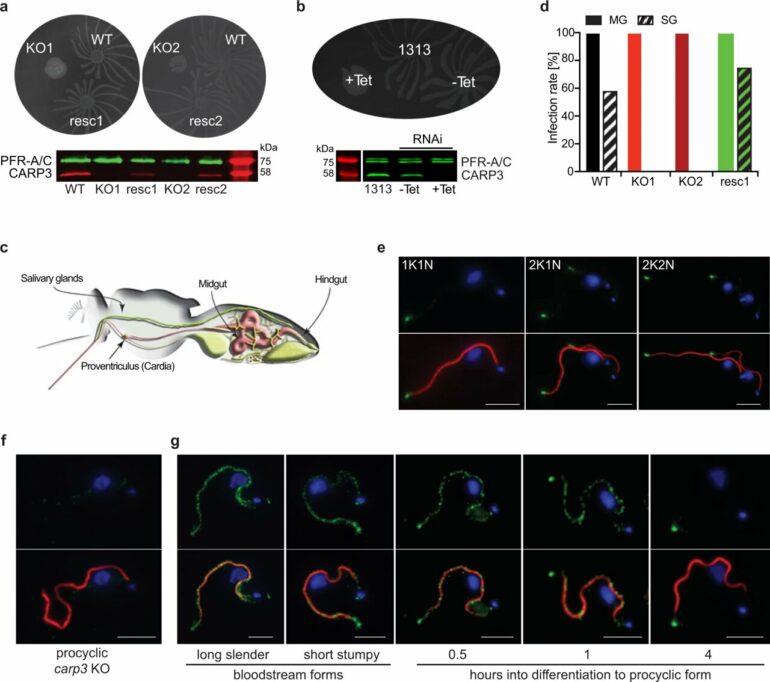 LMU researchers have deciphered a crucial signaling mechanism that enables trypanosomes to reach the salivary glands of the flies.

Tsetse flies are common across much of Africa. They feed on the blood of humans and other animals. In the process they can transmit trypanosomes, a protozoan parasite. Trypanosoma brucei causes sleeping sickness in humans. Pathogens infiltrate the host through the saliva of infected tsetse flies: from the blood, they reach the brain, leading to fatal symptoms if untreated.

But how do trypanosomes get into the salivary glands of tsetse flies after their blood meal? Dr. Sabine Bachmaier and Professor Michael Boshart from the Genetics division at LMU’s Faculty of Biology, together with scientific colleagues, have found a surprising answer to this question.

They show that a signaling apparatus at the flagellar tip of the protozoa controls the migration of trypanosomes in the tsetse fly via the messenger known as cyclic adenosine monophosphate (cAMP). The removal of a component of the enzyme complex that produces the cAMP signaling molecule was sufficient to prevent infection of the flies. Results of the study have now been published in Nature Communications.

Insights into the regulatory network

By way of background: Cattle and antelope are natural reservoirs of Trypanosoma brucei. During a blood meal, pathogens get into the gastrointestinal tract of tsetse flies. In order to survive and further propagate, trypanosomes need to adapt to their changing environment. They migrate back and forth between the bloodstream and the tissues of a mammalian host and between the digestive tract and the salivary glands of a tsetse fly, whereby they pass through a series of developmental stages.

“Our project is based on several international collaborations with research groups in Paris, Antwerp, and Rio de Janeiro,” says Bachmaier. “We’d long been interested in the question as to how parasites manage to orient themselves in the tsetse fly—and how this could be prevented in order to control transmission of the disease.”

Around ten years ago, the research group identified a new and trypanosome-specific component of the cAMP signaling pathway—the cyclic AMP response protein 3 (CARP3). “Our discovery that CARP3 is found primarily at the tip of the flagella of trypanosomes put us on the scent of a specialized signaling apparatus for the orientation of the parasites in the tsetse fly,” says Bachmaier.

When the researchers removed the CARP3 gene by means of genetic engineering, the composition of the enzymes (adenylate cyclases) that produce cAMP at the flagellar tip also changed. “Trypanosomes were subsequently no longer able to efficiently colonize tsetse flies,” explains the scientist. “In the salivary glands, we didn’t find a single cell of the parasites anymore.”

From basic research to application: The objective of a long-term strategy could be to impair the interactions between CARP3 and adenylate cyclases. This could be done, for example, by means of a synthetic peptide that would be produced in the flies using the technique known as paratransgenesis. Without colonizing the salivary glands of tsetse flies, the trypanosomes would no longer be transmitted.