Baboons ‘crouch and sprint’ to take standing up in their stride 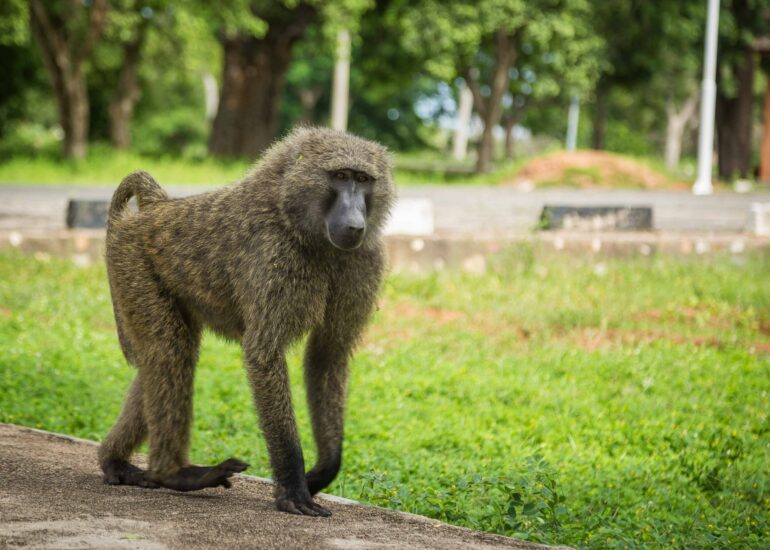 At some point in our evolution, humans gave up walking on four limbs, yet all of our ape cousins continue sauntering on four, resorting occasionally to two. Peter Aerts from the University of Antwerp, Belgium, is curious about how primates walk. When his postdoctoral student, Kristiaan D’Août, joined Gilles Berillon at the Primatology Station of the CNRS, France, to learn about how baboons move, the trio was surprised that the animals could suddenly rear up and begin walking on two limbs without breaking their stride.

“The transition… appeared to be a very smooth process,” says D’Août. The primates were somehow maneuvering themselves into an upright posture without missing a step, even though they are thought to be textbook quadrupeds—but how?

Berillon set up a camera in the baboons’ enclosure to capture the instant when the animals popped up to find out how they transition from walking on four legs to two so seamlessly. In Journal of Experimental Biology, the researchers report their discovery that baboons essentially crouch and then “sprint” their rear half under their torso to maneuver upright while continuing to move forward.

First the team had to find a way to get the animals to become upright on camera. “After trying to attract them with sounds, music and food, a large mirror that we could tilt placed at the end of the catwalk attracted them to walk and transit in front of the camera,” says Berillon, who with D’Août filmed members of the troop, from newborn infants to matriarchs and males, as they became upright on their hind limbs. “We usually filmed early in the morning for a couple of hours, before the light was too strong and the baboons got lazy or bored,” Berillon chuckles.

Back in Antwerp, Aerts, D’Août, Jana Goyens and François Druelle got down to the painstaking task of analyzing the maneuver, manually breaking the moving images down into 15 body segments—including the head, body, arms and legs—on each frame, calculating their center of mass and then adding them together, along with the body part rotations, to determine how the entire body moved as the animal maneuvered into an upright posture in less than one second.

Then, the team analyzed how the body rotated as the animal’s forelimbs left the ground and realized that the baboons essentially crouch their on hindlimbs and sprint them forward under the torso—over 2 or 3 steps—lifting the body upright as they stand up, while maintaining the same uninterrupted speed moving forward. “These transitions looked very natural, not requiring any special attention or effort from the animal,” says Aerts, in contrast to our lumbering efforts as we try to become upright from all fours.

But how were the animals pulling off the feat? The team suspects that initially the baboons either push off with their arms or drop their hips down to begin rotating the body upward, and then their next footstep pushes down, rotating the hip joints to propel the body further. However, around 75% of the way through the maneuver, the head and torso stop rotating as the legs continue running forward beneath the body, raising the hips until the hindlimbs are repositioned beneath the torso.

So, how much effort did the entire maneuver require? Calculating the amount of energy used as the baboons walked on four and then two limbs, the team determined that the primates were using about ~4.6J/kg/m for both walking styles. Yet, as the animals reared up, their energy consumption tripled to ~14.2J/kg/m. However, Aerts and his colleagues think that the maneuver is essentially effortless, as the entire event is over in less than a second and uses as much energy as standing from a seated position, allowing the animals to become upright “on the fly” without breaking their walking rhythm.

Under a moon spell: Shark attacks related to lunar phases

More information:
From quadrupedal to bipedal walking ‘on the fly’: the mechanics of dynamical mode transition in primates, Journal of Experimental Biology (2023). DOI: 10.1242/jeb.244792

Provided by
The Company of Biologists


Citation:
Baboons ‘crouch and sprint’ to take standing up in their stride (2023, January 19)